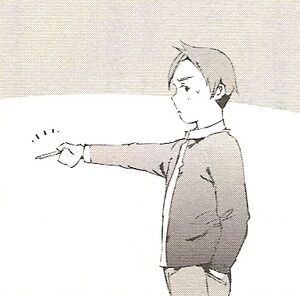 Days: Chapter 5
Yuuki (勇気, Yūki) is a young human who befriends Hinami Fueguchi and develops a crush on her.

Yuuki is a young boy depicted with reddish brown hair.

Yuuki is not be able to express himself clearly, shown when he first meets Hinami and says something rude accidentally. However he is still kind and can be quite timid.

When Hinami was captured by teens, he immediately went to find Kaneki and Touka to tell them.[1]

When they first meet he accidentally makes her feel bad for not being able to read at the same level as kids her age. But then he starts teaching her words instead of Kaneki or Touka.

Yuuki knew a bit about what his father does as a ghoul investigator.