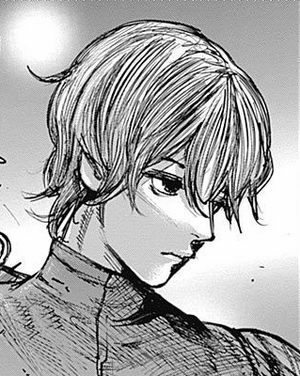 Matt Shipman
Yusa Arima (有馬 夕乍, Arima Yusa) is a former ghoul investigator and alumni of the Sunlit Garden. He served as one of Kishou Arima's personal squad until his defection at Cochlea. He and his squad formerly served as one of Ken Kaneki's bodyguards. Now, he is a First-Class Peacekeeper for the TSC.

Yusa is a slight boy with short, wavy black hair. He is typically dressed in the white trench coat worn by all members of his squad.

After the Dragon War, his hair has grown slightly longer and has turned white. He wears a black combat suit in favor of the white trench coat.

Yusa is a gentle and mild-mannered boy, often acting as the voice of reason within his group. He enjoys fantasizing and daydreaming, and hides an interest in learning about the outside world and things not pertaining to fighting.

Like the other half-humans bred by V, Yusa was also trained in the Sunlit Garden to be an excellent ghoul investigator.

Yusa, along with the other members of the Arima Squad, was tasked to protect Cochlea and later encountered Ken Kaneki beside Arima's corpse. After being granted permission to say their goodbyes to their late squad leader, they gathered around his body and cried over his death.[2]

Yusa and the rest of Squad 0 followed Kaneki deeper into Cochlea and encountered Eto Yoshimura who was critically injured on the floor. Moments later, Squad 0 interrupted the fight between Kiyoko Aura and Mougan Tanakamaru against Touka Kirishima, Ayato Kirishima, Renji Yomo, Kazuichi Banjou, and the members of Banjou's crew.[3]

Yusa is present when Ken Kaneki wakes up in :re sometime after the Cochlea Raid is over. He accompanies Kaneki and the other former Squad 0 members to the meeting at Tsukiyama's warehouse. He urges Shio Ihei and Rikai Souzi to stop ranking the ghouls and adding them up like points. When Naki's group expresses their discomfort with Squad 0 being present, Yusa states that they will not let Arima's last wish go unfulfilled. He remains present throughout Kaneki's formation of Goat. Later, Yusa watches the television in :re as a branch CCG office is attacked, hypothesizing it is probably Furuta's doing.

When Kaneki is deciding who will take part in the lab raid Yusa expresses his desire to join him.

Yusa and former Squad 0, along with Kaneki's forces, fight the Clowns as they attack the 22nd ward. When Shio expresses curiosity if No-Face is present, Yusa states he is going to get himself killed by thinking that way.

When Hajime Hazuki attacks Tsukiyama after revealing his true nature, Yusa along with former Squad 0 apprehend him with their quinque.

Yusa is present with former Squad 0 at Kaneki and Touka's wedding.

Yusa confronts Hajime with Hirako, Shio, and Rikai to allow Touka to escape with the ghouls. Koori Ui arrives shortly after and fights them with Hajime. Yusa follows Hirako's command to attack Ui on his right side; however, Ui kicks him away. Yusa then vows to correct his mistakes after being given advice from Hirako on Ui's quinque.

Yusa survives this fight; however, some unknown time during this confrontation Shio and Rikai are killed by Hajime.

Yusa and Hirako continue to fight Ui until a section of Kaneki's massive kagune, Dragon, appears and attacks them. The three quickly join hands and defeat the kagune together. After Dragon has destroyed parts of Tokyo, Furuta confronts Ui, Hirako, and Yusa who are worn-down after fighting.

As the three decide to leave together, Yusa ponders whether they are headed for the world Arima wished for.

Yusa, Hirako, and Ui arrive at the CCG headquarters when the ghouls propose joining hands. Yusa is present as the CCG accepts the ghoul's offer.

After Kaneki's body is retrieved from Dragon, Yusa walks with Kuramoto Itou, Hirako, and Ui through the remains of Tokyo. They ponder what will happen to humans until Hirako reveals that Arima believed they would eventually become ghouls.

Yusa along Hirako, Ui, Itou, and Takeomi Kuroiwa form a squad during V's surprise attack. Ui eventually takes command of attacking the disfigured owl, leaving Yusa and the remaining members of the squad to take on Kaiko. Eventually Yusa stops an attack from Kaiko that would have killed Hirako. Kaiko then claims that Yusa reminds him of Arima, while Yusa states that Arima is way stronger than him. Kaiko pushes Yusa to his limits while mocking him until Hirako stabs his foot. Yusa exclaims that Arima's name is an honor, then uses the opening to slash open Kaiko's face.

As a TSC member, he fights in a style that is reminiscent to that of Arima Kishuo. There was talk of him to inherit the name of Kishou, but he refused.

Yusa and the rest of his squad respect and look up to Kaneki as Arima's successor. They call him by his name as an investigator. Kaneki acts very kind and fatherly towards Yusa and his squad, even cooking food for them like he once did for his former "kids", the Quinx Squad.

Hirako says that Arima was hope itself to the children of the garden. Yusa had a profound respect and admiration for Kishou, as the idol of all young half-bred illegitimate children of the Washuu raised in the Sunlit Garden.

Half-Human Physiology: A half-human hybrid, Yusa possesses enhanced physical abilities that allow him to be a highly-efficient fighter.

Swordsmanship: Yusa is a skilled quinque user, and a specialist in techniques involving weapons modelled after long swords.