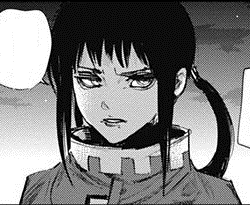 Rachael Messer
Yumitsu Tomoe (巴 ユミツ, Tomoe Yumitsu) is a young ghoul who was a member of Aogiri Tree as a direct subordinate of Tatara before the organization's downfall. She is known by the alias Grave Robber (墓盗り, Hakatori) or Quinque Hunter (クインケ狩り, Kuinke Gari), due to her habit of collecting quinques from the ghoul investigators she kills. 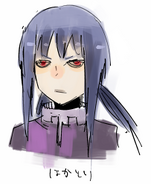 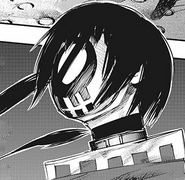 Grave Robber seems to be fond of fighting and finds the idea of battling against bikaku-type ghouls or a Quinx of the same Rc type to be entertaining, even offering to compare which is stronger.

Grave Robber was among the ghouls hired by Kanae von Rosewald to assassinate the Quinx Squad and lied in wait at an isolated parking garage as part of a trap.[4]

When Karao Saeki was injured by Tooru Mutsuki, she decided to intervene and prepared to face the Quinx in battle. After barely gaining the upper hand in the battle due to her kagune, she nearly defeated Mutsuki, but Kuki Urie appeared and drove her off. Finding the plan out of control, she decided it was time to flee and escaped. She met with Hooguro and Shousei and mocked them for their loss.[3]

On Rushima, Grave Robber attacked Seidou Takizawa after he tried to attack Tatara, but he stopped her quinque sword with his hand and proceeded to punch her in fast succession, in her "uterus."[6]

Takizawa later grabbed Grave Robber by her hair and told her that if she did not want to die, she would come with him and escape the island. Grave Robber then left with Takizawa, who supported a fatally wounded Akira Mado on his shoulder.[7]

Grave Robber, in a state of starvation, was approached by Seidou Takizawa. The two went on to sit down and converse about the appearance of the Oggai.[8]

She became the leader of a faction she created, to protect ghouls who no longer had a place to live. It has become a foundation for ghouls who cannot live among humans.

Grave Robber arrived to fight Mutsuki when Torso was overpowered.

She was not blood-related to the duo, but they were her older brother figures and she holds a grudge against Koutarou Amon for slaying them. Grave Robber's hope is to avenge them.[1]

Grave Robber worked under him as a direct subordinate in Aogiri and respected him.[1]

She holds a grudge against the former investigator for killing the Bin brothers.[1]

Ghoul Physiology: Having been born as a ghoul, Grave Robber possesses enhanced physical capabilities along with a bikaku kagune.

Swordsmanship: Grave Robber prefers to use quinque she has collected from slain investigators in battle instead of her kagune.[3] Her swordsmanship is on par with trained investigators.[4] 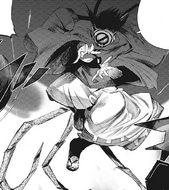