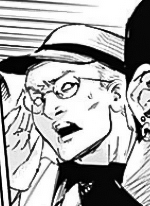 :re Chapter 19
Yukio Kurodawara (黒俵 幸生, Kurodawara Yukio) was a First Class Ghoul Investigator. He participated in the Auction Mopping-up Operation as the deputy squad leader of the Atou Squad under Daisuke Atou.

He was killed by Seidou Takizawa.[2]

Unlike his subordinates and peers, he looked a bit older. He wore a cap and thin-framed glasses. He was also wearing the standard CCG uniform or formal suit.

His personality is unknown due to her short role in the story.