For the character of the main series, see Yukinori Shinohara. 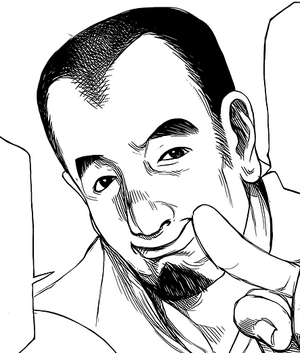 Shinohara's appearance resembled his counterpart, except he had a less muscular build and more facial hair.

Shinohara came across as a friendly and easy-going man, but this merely masked his ruthless nature. His hatred of ghouls ran deep enough that he viewed human lives as secondary, writing off a hostage as a "necessary sacrifice."

Yukinori Shinohara was first encountered when Touka was observing him while he was speaking to an unknown investigator. Kaneki revealed Shinohara to be a ghoul investigator.

Kaneki met Shinohara as he was leaving the bathroom after vomiting, Kaneki presumed that Shinohara was fairly dense as he seemed not to notice that Kaneki had been vomiting.

Shinohara next approached Kaneki in an unknown cafe. They had a brief discussion in which Shinohara offered Kaneki a meal. Shinohara forced him to accept it and naturally, Kaneki vomited on the table in front of them, confirming Shinohara's suspicions of him being a ghoul.

Shinohara was next seen walking through a parking lot while Kaneki was trailing close behind him. Kaneki proceeded to attack him. Shinohara parried all of Kaneki's attacks and returned by punching Kaneki in the abdomen, Shinohara proceeded to have a brief conversation with Kaneki. During the conversation Touka approached Shinohara telling him to leave Kaneki alone. Ignoring Touka, he tried to attack Kaneki. Kaneki grabbed Touka from behind and tried to use her as a hostage. Shinohara however, stated she was "A necessary sacrifice." Touka then attacked Shinohara, cutting his nose open, revealing she was a ghoul. She kicked him in the side of his chest before Kaneki pierced Shinohara's torso, killing him.