Edit
watch 01:30
Who is Yukinori Shinohara?
Do you like this video?
Play Sound 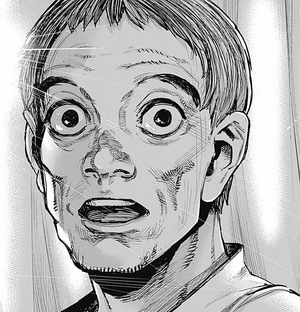 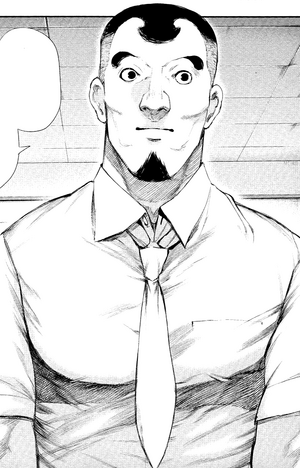 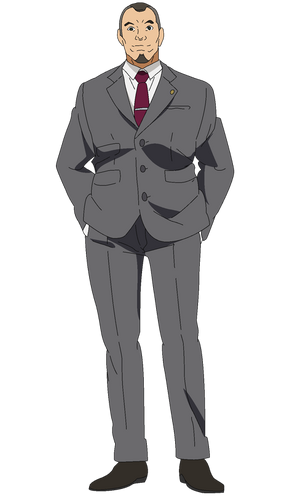 "If an angelic being fell from the sky and tried to live in this world of ours, I think even they would commit many wrongs. I wonder what colors their purity would be dyed..."— Yukinori Shinohara, Tokyo Ghoul Chapter 137

Yukinori Shinohara (篠原 幸紀, Shinohara Yukinori) is a Special Class Ghoul Investigator and an Investigation Commander in Division I. He was assigned to the 20th ward and responsible for the investigation of the Binge Eater.

In the past, he acted as Koutarou Amon's instructor at the CCG Academy.[4] His last partner was Juuzou Suzuya. He was Kureo Mado's first partner.

Shinohara is a middle-aged, bulky man with a large nose and a wide chin. He has short black hair and a beard. He normally wears the standard CCG investigator dress code and a collar shirt during casual occasions.

After enduring a coma for several years, he became noticeably emaciated. His hair has also become grey.

Shinohara in his youth.

Shinohara in a vegetative state.

Shinohara can be described as a "father to his men" type of character. He once mentored Amon, whom also regards Shinohara as a mentor close to Mado. Cheerful and kind, he is a generally liked man among his coworkers and because of his long experience as an investigator, he hardly flinches to anything except for Suzuya's violent tendencies.

Shinohara was mentored by Fujishige Iba and served with him in a trio along with Kureo Mado, during which they were responsible for a number of achievements.[5]

As a Rank 1 Investigator Shinohara killed Demon Yamada and later, as an Associate Special Class,[6] he and Mado managed to secure Arata Kirishima.

Shinohara first appeared as a mourner at Kureo Mado's funeral service. After the funeral service had ended, he approached Amon expressing his sorrow. He had to leave immediately to look after Suzuya. Before he left, he told Amon that Mado was proud of him.[4]

Shinohara was deployed to the 20th ward together with Kousuke Houji and Seidou Takizawa from the CCG Main Office. This was a measure to deal with the dangerous stand-alone ghouls in the 20th ward. Additionally, the CCG's 11th ward Branch had become powerless, so the deployment was also meant to prevent the destruction of the CCG's 20th ward Branch. Otherwise, a pincer attack on the wards between the 11th and 20th ward could not be avoided. Afterwards, he picked Suzuya up who had been arrested by a police officer. He then witnessed Suzuya take a bite out of the officer's ear.[2]

While investigating the "Binge Eater" case and the disappearance of Dr. Akihiro Kanou, Shinohara found out that Kanou owned a mansion. He decided to take a team of investigators to search for clues on Kanou's whereabouts there. Upon their arrival at the mansion, Shinohara split the investigators into two teams to cover more ground. Shortly after splitting, his team stumbled upon Ken Kaneki devouring the experimental ghouls in Kanou's underground lab. While asking the ghoul questions, Shinohara was suddenly engaged by Kaneki and activated his Arata armor in time to lessen the sudden, powerful impact. After a short bout of battle, Shinohara successfully cut Kaneki down, damaging his kakuja kagune; however, Kaneki continued on with his usual kagune form, causing the investigator to be annoyed at the number of his kakuhou. Fighting the already exhausted investigator, Kaneki quickly overpowered him and left him near death. Shinohara was later found by Amon lying on the ground with Kaneki seemingly feeding off his corpse. Enraged by the sight, Amon fought off the ghoul with the later help of Suzuya. In the aftermath it was revealed that the ghoul was only eating the Arata armor off the unconscious Special Class; Shinohara was later hospitalized, stating that he probably could not be called "invincible" anymore.

While taking part in the Owl Suppression Operation, Shinohara fought against Yoshimura, the Non-Killing Owl, along with Suzuya, Iwao Kuroiwa, Kousuke Houji, and Koori Ui. They managed to subdue the SSS-rated ghoul and began celebrating their victory. However, the real One-Eyed Owl suddenly appeared, catching the squad off guard and inflicting heavy damages to most of them. Shinohara was knocked out and the One-Eyed Owl severed his leg to "match" Suzuya's, who lost a leg fighting the other Owl earlier, before stabbing Shinohara in the stomach and "mixing" it. Due to heavy blood loss from the injuries, Shinohara suffered brain damage and entered a vegetative state.

Two years later, Shinohara remained hospitalized in a vegetative state with little hope for recovery. Suzuya continued to visit him along with his new partner, Hanbee Abara. While spending the afternoon with Ginshi Shirazu and Saiko Yonebayashi, Abara took them to see Shinohara in the hospital.[8]

Six years later, Shinohara was able to heal and wake up from his coma, due to the rebirth operation, made possible by the research done into substances originating from the Dragon War.

Shinohara was in a coma for many years, but he achieved a miraculous recovery thanks to medical advances. After the dismantling of the CCG, he did not engage with TSC duties, but continued his friendship with dragon general Suzuya, Marude, and company. He also provided advice and support from the sidelines. He moved to the suburbs of Tokyo and lived a peaceful life.

Shinohara's kindness has a strong impact on the deeply-troubled Suzuya. Shinohara works to rehabilitate the damaged young man, and offers him guidance as both his superior and a surrogate father figure. He has a strong affection for Suzuya, and according to his wife, he even considered him like one of his own children. Suzuya is devastated by his loss, but draws strength from it and grows into a more stable and kind-hearted person as a direct result of Shinohara. In the years following his hospitalization, Suzuya continues to visit him.

They were briefly shown together while fighting the One-Eyed Owl ten years ago. Apparently they were friends and Mado was seen to have taught Shinohara well.

Amon is seen by Shinohara as an excellent investigator.

Shinohara often goes in missions with Kuroiwa, and has fought the Non-killing Owl at least twice together.

As a Special Class Investigator, Shinohara is an experienced veteran who has encountered as many powerful ghouls as the number of students he has taught. He uses a quinque made from strong ghouls that he has personally defeated. He is a bulky, strong human that can wield a quinque that fits his immense vitality, such as weapons that deal ferocious blows, or wear armor, like the Arata, that severely strains his body.

As a lecturer, he shows he is a very adept and patient teacher. He had taught Amon and other CCG Academy students and currently gives lectures to his underling, Suzuya. 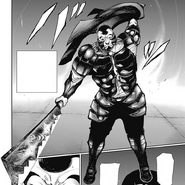 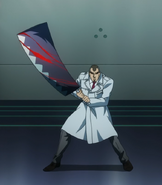