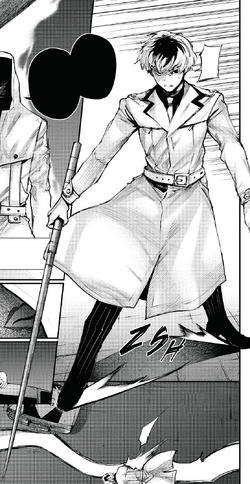 Chapter 112
Yukimura 1/3 (ユキムラ1/3, Yukimura 1/3) is a koukaku-type quinque with a long, tapered blade similar to a sword. As its name suggests, it is actually a set of three individual swords, though most owners have only used one.

It was originally owned and wielded by Kishou Arima in his early years as an investigator, and later wielded by Take Hirako while the two were partners. It was last owned by Haise Sasaki, the former mentor of the Quinx Squad, though after he was disarmed by Kanae von Rosewald while wielding it against Shuu Tsukiyama, he has not been seen with it in his possession.

It can also be dual-wielded, though so far only Arima has done so.