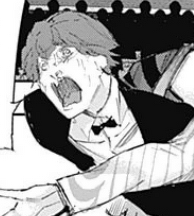 Orion Pitts
Yoshiki Ookura (大倉 ヨシキ, Ōkura Yoshiki) was one of many victims presented during the Auction event. He was eventually sold off to the highest bidder, Mirumo Tsukiyama.

Outside of captivity, he was an established actor well-known for starring in the drama Brainball.

Being a victim of the Auction event, he was sold off. Whether he is alive or not is still a mystery.