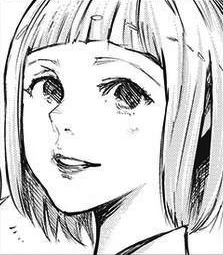 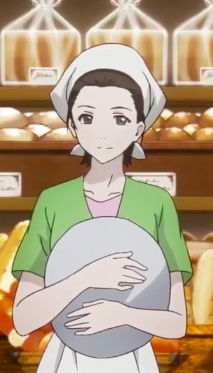 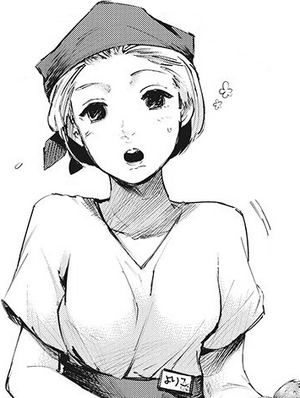 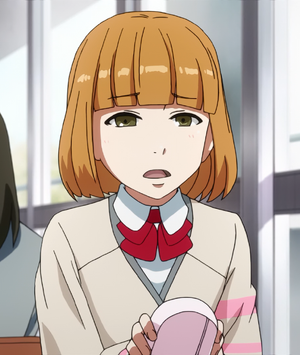 She is now working as a waitress in a bakery, and is the wife of Takeomi Kuroiwa.

Yoriko has short hazelnut hair in a bob-cut and blunt bangs. She has a very kind and pleasant demeanor, always seen wearing her school uniform and a warm smile.

Her hair is unchanged after the timeskip, though she puts it up using a bandana when at work.

After the Clown Siege, she has allowed her hair to grow out almost back to its original length. 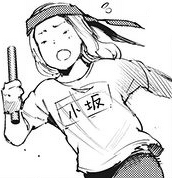 Yoriko in her childhood. 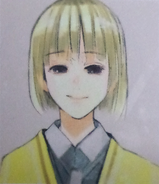 Yoriko's profile in :re Volume 12.

Yoriko is a friendly, sweet and caring girl who strives to become a cook. However, as ghouls cannot eat human food, her refined cooking tastes, normally tasty to humans, tastes even more horrible to ghouls than standard food.[2] She cares deeply for Touka Kirishima and worries over her, but she often enjoys teasing about Kaneki being her so-called "boyfriend." In return, Touka holds her in high regards and surprisingly cares deeply for her too; much like Kaneki with Hide.

When Touka got sick, Yoriko delivered food to Touka's residence and discovers Ken Kaneki at her place, mistaking him for Touka's boyfriend.[3]

Yoriko and Touka make plans to visit the zoo during summer break. After the Anteiku Raid, Yoriko goes to the zoo alone to wait for Touka.

In the √A anime, Yoriko spends most of her time helping Touka prepare for her university entrance exams.

As Ginshi Shirazu and Takeomi Kuroiwa go to a bakery (on Saiko Yonebayashi's pleading because she was hungry and said there was a delicious bakery nearby), Yoriko appears holding a tray of baked rolls, calling out Takeomi.[4] She adds quietly to herself; "That figures" when Shirazu asks Takeomi if he knows her he simply calls her by her last name.[4]

She greeted Takeomi when he visited her bakery with Saiko Yonebayashi and Koori Ui. When her manager becomes worried at the increasing ghoul attacks, she tried to calm him down. She was then surprised when Takeomi asked to marry her, but accepted soon after.[5]

She was shopping for a wedding dress before turning around as an unknown person called her name. Later during a confrontation with Touka at :re, Tooru Mutsuki pulled out a mangled hand with an engagement ring and a photo of Touka and Yoriko.[6] Mutsuki claimed that Yoriko was arrested for being suspected of harboring ghouls.[7] However, this was a lie to provoke Touka, and Yoriko later celebrated her marriage to Takeomi safe and sound.[8]

Some time later, she was arrested under suspicion of violating the Ghoul Countermeasures Law by supporting ghouls.[9] Based on counterfeit evidence, she was trialed and sentenced to death. In reply to the prosecutor's request from April 15, 5 ASBI (April 15, 20██) regarding permission to carry out the death penalty, Bureau Director Kichimura Washuu gave order on April 23, 5 ASBI (April 23, 20██) to enforce the court judgment.[10]

She continues to bake bread as a hobby while taking care of her firstborn son.

Yoriko has been close to Touka for a long time and she seems to support Touka in the same way Hide does with Kaneki. Touka also cares deeply for her friend and defended her against some classmates who tried to bully her. Yoriko is not aware that Touka is a ghoul, however, and often brings her food or tries to get Touka to eat with her at lunch.

Since the destruction of Anteiku, they have not seen each other. Yoriko tells this to Takeomi and he is investigating what happened to Touka.

After being arrested and starved in isolation, Yoriko thought back to her days in school with Touka. She felt regret for not realizing that she was hurting her friend by feeding her regular food, while Touka had to endure the pain for Yoriko's happiness. Showing that even when being informed that Touka is a ghoul, Yoriko still cares for her friend deep down.

Takeomi was Yoriko's classmate in elementary school for several years, although he often transferred because of his father's duty. Both of them still remember each other. She noted that he never talked much but had a strong presence and was incredibly athletic.[11]. Takeomi eventually asks Yoriko to marry him.[5]

The two are never really seen interacting. However, Mutsuki does present what is supposedly Yoriko's mutilated hand. This shows that Mutsuki has little concern for her well-being and sees her as a means of hurting Touka. Later, it is revealed Mutsuki never harmed Yoriko and it was simply a ruse to try and provoke Touka. However, he does express some jealousy at her and Takeomi's wedding.

Yoriko is an ordinary human, living a peaceful life. Her only notable skill is her exceptional cooking.