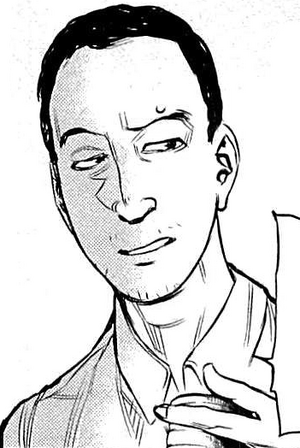 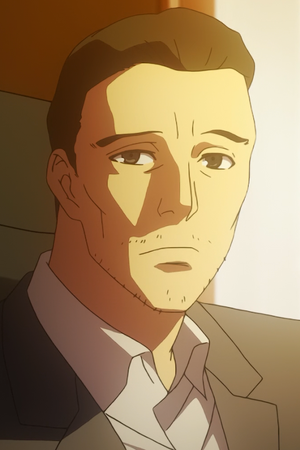 Chris Hury
Yasutomo Nakajima (中島 康智, Nakajima Yasutomo) is a bureau investigator working at the CCG's branch in the 20th ward and was the partner of Ippei Kusaba.

Yasutomo Nakajima is a tall middle-aged looking man with short black hair. He wears a formal suit with an open collar.

He is brusque but generally nice. He was very mournful when lamenting Ippei Kusaba's death whom he shared fond memories with.

Together with his partner, Ippei Kusaba, they participated in the investigation of Suspect 723, led by Kureo Mado and Koutarou Amon. As part of the investigation, Nakajima was with Kusaba as he briefed in the ghoul investigators. Kusaba reported the suspect's transit from a train to a stone monument -which they speculated to be a grave- and left on foot before getting into a car they failed to get the license number of. Nakajima was unsettled when Amon told them the "morality" they should have as investigators.[1]

Nakajima stayed silent when Koutarou secured evidence that the suspect was connected to Number 696. During the ambush of Ryouko Fueguchi and her daughter, Hinami Fueguchi, him and Kusaba were the first investigators the two ghouls noticed before they ran.[2] He was nervous after the mother ghoul unleashed her kagune and was hit in the face before the daughter ghoul fled.[3]

After the successful termination of 723, Mado was thankful for the cooperation of the paired bureau investigators. When told they would receive a reward, while Kusaba was happy about the news, Nakajima remained solemn-faced. Later, Amon, Nakajima, and Kusaba went to eat after work. Afterward, Nakajima and Kusaba exited the restaurant. He listened as Kusaba started some small talk, comparing himself to the investigators from the CCG Main Office. Without warning, in the middle of being motivated, Kusaba was killed by Rabbit in front of him. Horrified, he was nearly killed when Rabbit struck at him, but was saved by Amon.[4]

Kusaba's funeral was held at the CCG, afterwards he asked Amon to eat with him at the restaurant from before. Sharing memories with Amon about treating Kusaba to meals, wondering what he will do with his job since his partner was gone, he became overwhelmed with emotion. Surprising Nakajima, Amon frantically started eating, telling him he ate a lot more than Kusaba, making Nakajima smile.[5]

They had a friendly relationship as coworkers, usually eating out together for lunch.