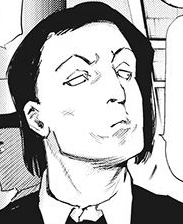 :re Chapter 1
Yasuhito Nezu (根津 安人, Nezu Yasuhito) was a Rank 2 Ghoul Investigator and a member of the Itou Squad.

Nezu had dark hair that reached his chin. He kept the front half parted to one side.

While accompanying the rest of the Hirako Squad through the CCG Main Office, he encountered Tooru Mutsuki. He and his squad criticized Mutsuki and the Quinx Squad.[6]

When Haise Sasaki used his powers and lost control, Nezu provided support for his comrades while they took him down. Afterwards, he remained on standby while the crisis was resolved.[7]

He joined his squad during the Auction Mopping-up Operation, encountering the Clowns, Uta and Roma Hoito.[8]

Nezu and his squad joined the Quinx squad after Sasaki headed off to the top floor, clearing ghouls until they confronted Noro. He was assigned to support the back with Ginshi Shirazu, but was immediately killed by Noro's kagune which went through and cut Umeno's body as well.[4]

Nezu is shown to be a rather skilled investigator able to hold off a SS-rated ghoul.