Start a Wiki
watch 02:09
Who is Yakumo Oomori?
Do you like this video?

"Every time someone is disadvantaged in the world, it is because of their 'lack of ability.' The weak are trampled. They are overrun. They are violated. They are afflicted."

Yakumo Oomori (大守 八雲, Ōmori Yakumo) was an executive of Aogiri Tree and the founding leader of the White Suits from the 13th ward. Typically, he was called by his alias Yamori (ヤモリ, lit. "Gecko"). Due to his brutality, he also became known as 13th Ward's Jason (第13病棟のジェイソン, Dai 13 Byōtō no Jeison).

Yamori was a very bulky man with slicked back blonde hair and sharp lizard eyes and was every bit as scary as he looked. Normally in an entirely white suit and black dress shirt, he resembled a typical gangster. His face closely resembled a gecko. His mask is a reference to Jason Voorhees, a hockey mask that echoed his violent temperament. 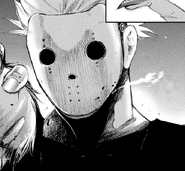 Yamori's mask.
Add a photo to this gallery

Yamori's mask.
Add a photo to this gallery

Not much was known before his imprisonment, but Yamori developed an arrogant and sadistic personality that mirrored his interrogator as a means of escaping the reality of his torture. He was a manipulative and deceitful ghoul who would be violent in order to get what he desires.

He inherited the finger cracking from his interrogator which he would, unintentionally, pass to Kaneki. Despite his brutish, cruel, sadistic and violent nature he was somewhat carefree. He also loved his mother dearly, enough so that in his last moments alive he constantly called out to her.

At an unknown time, Yamori lost his mother.[3]

In the 13th ward, he was acquaintances with Sumiharu Katou and Uruka Minami, also known as "Lantern,"[6] and took part in an ambush of Kishou Arima and Taishi Fura at Minami's request. He easily cornered Fura and has the youth at his mercy until he was blindsided and wounded by Arima. He fled and managed to break through the CCG cordon outside.[7]

Before he was called "Jason", he messed up and was taken to 23rd ward's ghoul detention center, Cochlea, because of the information he held about the 13th ward. He was left alive for this information.

During his imprisonment in Cochlea, he was tortured relentlessly by a sadistic investigator working there. He desperately tried to escape the pain: He convinced himself he was the torturer, not the tortured one. When their roles were reversed, he felt a thrill he had never felt before; it seemed like he had truly become human.

During the torture, he learned about the injections and methods to inflict pain on ghouls. He started seeking ways to satisfy his sadistic hobby by looking for unfortunate victims to bring to his personal torture chamber.[8]

At an unknown time, he came into contact with Naki and took the younger ghoul under his wing after beating him in a fight. Some time later, Naki was captured and placed in Cochlea as a result of protecting Yamori.

In the anime, Yamori visited Asaki Fueguchi to receive a new pair of pliers after his old pair was taken by Rize. Asaki agreed, while Ryouko and Hinami hid from Yamori. Yamori returned later to obtain the pliers, and was asked by Asaki to leave him alone. Yamori agreed, and proceeded to throw Asaki out of his office. Yamori was then confronted by two ghoul investigators: Kureo Mado and Koutarou Amon. He engaged in a brief scuffle with them before fleeing.[9]

Yamori and Nico were ordered by Aogiri Tree's leaders to capture Rize Kamishiro or the person smelling like Rize.[10] Together with Ayato Kirishima, they raided Anteiku and captured Ken Kaneki. Yamori informed Tatara they captured the one who held "some of Rize" and would bring him to Noro's place.[11]

Yamori decided to turn Kaneki into his next "toy."[12] Nico had found out about Anti-Aogiri's planned escape attempt, so Yamori foiled their escape, killing Tetsu and Moku. He offered Kaneki to overlook the other members of Anti-Aogiri in exchange for Kaneki becoming his underling. Left without a choice, Kaneki accepted Yamori's offer.[13]

After Yamori and Kaneki had entered Yamori's torture chamber, Yamori then tortured Kaneki for ten days. He injected Kaneki with Rc suppressants to suppress his ghoul powers and cut off his fingers and toes like nails. When the injection's effects wore off, he forced Kaneki to eat so his fingers and toes would regrow. Later, he also placed a Chinese red-headed centipede in Kaneki's ear.[8]

Unable to break Kaneki's mind through physical torture alone, Yamori decided to force Kaneki to choose whether he would kill Kouto or Kei. This way, Yamori revealed that he reneged on their deal. Since Kaneki was unable to choose between them, Yamori killed them both. This triggered Kaneki to embrace his ghoul side.[14]

When CCG commenced its attack on the 11th Ward Base, Yamori came to eat Kaneki. However, Kaneki instead took a bite of Yamori, escaped his bindings, then the two fought.[2] Yamori was eventually defeated when Kaneki ate his kagune. Kaneki left him lying helplessly in his hobby room.[15]

Juuzou Suzuya found the heavily injured Yamori and killed him.[3] His kakuhou was then used to create Juuzou's quinque, 13's Jason.

Yamori saw Kaneki as a "good" toy for his hobby of torturing.[8] He saw him as a weak morally-guided boy and made use of his powerful regeneration to satisfy his sadistic pleasure. Ironically, Yamori, who initially believed he weakened Kaneki, was overpowered and defeated by him, being the catalyst for his transformation.

Yamori treated his right-hand man with kindness and patience, unlike every other interaction he had in the series. Besides entrusting him with errands and handling money, Yamori gave him birthday presents and took his time to patiently explain things in simple terms for Naki. In return, Naki adored him as a "god-like" figure, admired his strength and tried to be just like him in all ways. They both are noted to have a liking for torture, one of Yamori's promises to Naki was that he would torture him. After Yamori's death, Naki grieved to extremes and attempted to seek revenge against Kaneki.

Yamori met Nico one night in a club. As Nico likes to have good-looking men around him, he immediately formed a relationship with Yamori and decided to stick with him for as long as he was able. Their relationship may have evolved into more than just partners. Nico followed Yamori into the Aogiri Tree despite being a part of another ghoul gang.

Nico actually enjoyed Yamori's sadistic tendencies, especially when they were directed toward himself, as was proven when Yamori impaled Nico through the stomach. The only case proven when Nico was critical about Yamori's moral values was when he threatened to kill a mother and her son.

Even though they spent a long time together and obviously formed a bond that worked between them, they were not too emotionally invested in each other. As evidenced by Nico when Yamori died, he was sad to lose a good-looking male, but overall not sad that Yamori was dead.

The relationship between Yamori and Nico was a long and complicated one, filled with blood, death, and partnership. If there was more between them than just an understanding friendship and a common interest in sadistic/masochistic tendencies, it has not been confirmed although it is heavily suggested.

Yamori was subject to frequent torture from Tokage during his imprisonment in the past. This torture affected Yamori to the extent that he became very sadistic, inheriting multiple traits from his torturer such as practicing torture and cracking his fingers in a similar style to Tokage. He also was 'grateful' to Tokage for teaching him a certain perspective of the world; that 'all individual weakness stems from a lack of individual ability'. This was later echoed to Kaneki who repeated many similar actions.

Ghoul Physiology: Yamori was an S-rated ghoul, a powerful threat with great physical strength and speed due to the cannibalization of other ghouls. In the 13th ward, there was almost no one that dared defy him.[2] 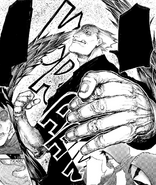 Retrieved from "https://tokyoghoul.fandom.com/wiki/Yakumo_Oomori?oldid=477499"
Community content is available under CC-BY-SA unless otherwise noted.