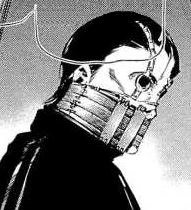 Chapter 74
Wobbegong (大瀬, Ōse) was the leader of a gang of human ex-convict thieves, and was also an S-rated ghoul. His group frequently committed crimes and caused a great number of policemen casualties.

Wobbegong wore a mask that covered his lower face of what seemed to be metal plating with two monocle-like lens connected to them.

At some point in the past, Wobbegong led his gang, which frequently committed crimes and caused a great number of policemen casualties.

He was eventually killed by Iwao Kuroiwa and his kakuhou was used to create Kuroiwa Special.[1]

Ghoul Physiology: As a S-rate ghoul, whose kakuhou was used to create a Special Class Investigator's quinque, it can be presumed that Wobbegong was a proficient and worthy opponent.