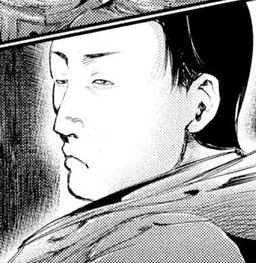 He wore the typical attire of Aogiri Tree's members.

Usu participated in the Anti-Aogiri meeting of ghouls associated with Banjou where they planned to escape from the 11th Ward Base.[1]

He takes part in the failed escape attempt and is locked up in one of Yamori's isolation cells. During the course of the 11th Ward Battle he is freed along with the others by Kaneki. He is last seen being carried away from the base by Banjou.