For the quinque, see Lantern (Quinque).

Minami was a beautiful teenage girl, with long brown hair worn down. She usually wore her school's uniform, and was admired by others for her cheerful demeanor and good looks.

As Lantern, she wore a mask that resembles a Jack-o-Lantern and a large trench coat. This would completely conceal her face and body, causing many to mistake her as a man. 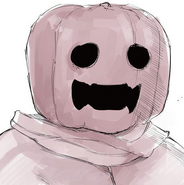 Minami's Mask.
Add a photo to this gallery

Minami's mask.
Add a photo to this gallery

Minami was an example of a ghoul with a severely compartmentalized personality, neatly dividing her life between the human and ghoul worlds. While living as a human, she was a hard-working and cheerful girl that easily makes friends. However, as Lantern she was a cruel serial killer noted for her extreme appetite and brutal killing methods. Minami had considerable admiration for the peaceful lives that humans led, and longed to experience that for herself through going to school. However, Minami also harboured intense feelings of jealousy towards humanity for their peaceful and easy lives. These feelings led her to carry out a twisted form of vigilantism, preying upon people that she believed did deserve or appreciate the gift of living as humans. In this way, she was incredibly petty and cruel, viewing juvenile delinquents with the same disgust as hardened criminals because both disrupted the order of society. She claimed to be doing human society a favour, through killing these "undeserving" elements.

She hinted at having had a very difficult past, breaking into tears when mentioning how difficult it is to live as a ghoul. Her relationship with other ghouls was strained due to her binge eating, and complete disregard for them. She readily manipulated others to achieve her goals, sacrificing others to test Arima's strength and tricking Yamori into doing her bidding.

Minami first appeared as Lantern, hunting delinquents in an isolated area. After killing three of Fura's friends including Ryou and injuring Aki's right eye, she ran away from the area. Later on when she was targeted by her hair dresser, another ghoul, who mistook her for a human, she was saved by Arima and Fura. Using the opportunity to disguise herself as a human friend, she offered to help the duo collect information on where ghouls may be. Upon reaching an area where the information pointed to, Fura splits from Arima and Minami to investigate another section. Alone, Minami attempted to kill Arima, but he defeated her. Fura returned and after they had a short talk, Minami attacked and was killed by him.

Ghoul Physiology: Having been born a ghoul, Minami possessed enhanced physical capabilities along with a bikaku kagune.

Bikaku kagune: Minami's bikaku resembled a lizard's tail, and had extreme flexibility. She alternately used it like a whip, or a sword wrapped around her arm. She was also capable of burrowing her bikaku in the ground and attacking with it from below. 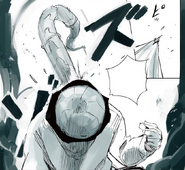 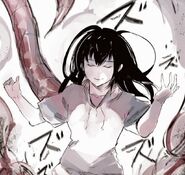 Minami using her kagune.
Add a photo to this gallery

Minami using her kagune.
Add a photo to this gallery

Retrieved from "https://tokyoghoul.fandom.com/wiki/Uruka_Minami?oldid=457400"
Community content is available under CC-BY-SA unless otherwise noted.