This article is about the 24th ward resident. For other uses, see King (disambiguation). 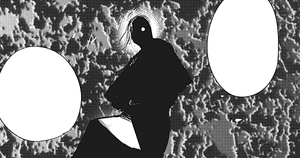 King of the 24th Ward
Naagaraji

:re Chapter 61
The Underground King (地下の王, Chika no Ō) was the king of the ghouls living in the 24th ward. The people of the 24th ward called him Naagaraji (ナアガラジ, Nāgaraji). He is a significant figure in ghoul mythology, rumored to have attempted a revolution some time within the last 100 years.[2][3]

He has a familiar resemblance to other members of the Washuu clan. He also has a mole on the left side of his chin. He appears to have a kakugan in his right eye.

The Underground King in the past.

Born into the Washuu Clan as a one-eyed ghoul, he developed strong hatred against his own family and turned against them.[1] Eto Yoshimura described this as an uprising against humanity, and claimed that this battle led to the Japanese government granting authority to the Washuu Clan, creating the Commission of Counter Ghoul to crush the revolution.[2] Nishiki Nishio, however, described this as an uprising while humanity was recovering after the war. The King led a major conflict against a weakened humanity, resulting in the creation of V. According to the legends, this individual was eventually defeated and forced to flee underground to the 24th Ward. Stories claim they founded a great city underground, where they would wait until the time when ghouls could again rise up against humanity.[3]

An expedition into the deepest sections of the 24th Ward, led by Ayato Kirishima, discovers what appears to be an abandoned city. Three of its residents, a group of ghoul children that claim to be human, state that the city was destroyed by Nagaraji, their King, in a form similar to that of Dragon. While frantically fighting against their King for their own survival, the residents destroyed the eyeball-like structures of the kagune, which dulled the King's attacks, until at some point the King stopped moving and turned to stone.[1]

His kagune-like structure has a serpentine formation with various arm appendages that spread from building to building. It also appears to be stone-like. Given the sheer size of it, it's likely that something occurred for the King's Kakuja to mutate into its current gigantic form. Similar to Ken Kaneki and the "Dragon" spawned by his Kagune.