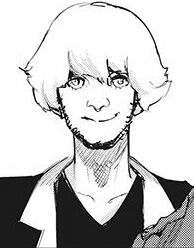 Chris Messersmith
Tycho Johannes (ティコ・ヨハネス, Tiko Yohanesu) is the owner of Jewelry Tycho. He is also a relative from one of the Tsukiyama branch families.

Tycho has abundant light colored hair and a large surface area of beard.

Tycho was at the Luna Eclipse building where he, along with Kurei and Jirou Asada and their followers prepared to fight the CCG to delay them in their chase of Shuu Tsukiyama. All were aware it would cost them their lives but did it out of loyalty to Mirumo Tsukiyama. While they waited for the arrival of the CCG Tycho commented how he could have had Shuu model for him.[1]

It is unknown what Tycho did during the operation but he survived and was in good condition.

When Ken Kaneki asked Tsukiyama to bring a bunch of white suits, Tsukiyama had Tycho provide them for him.[2]

Later, with Goat, Tycho mentioned that his companies had no relation with the Tsukiyama conglomerate, and because of that he still maintained his companies.[3]