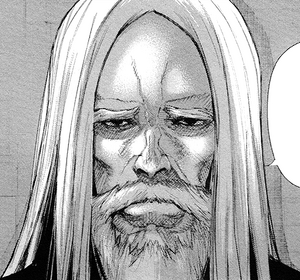 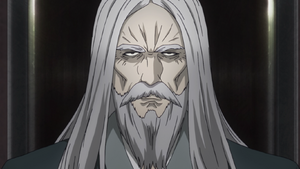 Chairman of the Commission of Counter Ghoul

As head of the Washuu Clan, he has "bred" numerous illegitimate offspring including Kishou Arima, Kichimura Washuu, Hairu Ihei and Rize Kamishiro.

Tsuneyoshi was a senior man with long white hair and a beard. 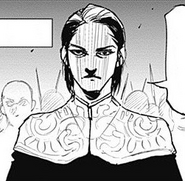 Tsuneyoshi in the opening Asphyxia

Because of his seriousness and powerful insight, the air around him was always heavy. He disliked nonsense as he was shown putting his interest in the outcome rather than a rhetorical excuse.[4] Despite his stern disposition, he was a pragmatist inducting Juuzou Suzuya and Ken Kaneki as ghoul investigators despite the former's psychological instability and the latter's cannibalistic species at their sponsor's request.

However, beneath the facade, he was a hypocrite. He was a ghoul himself while running an anti-ghoul organization and his ghoul investigators were likely seen as nothing more than pawns to him as well as food source as it was later revealed by Kaiko that he and the rest of the Washuus were eating the corpses of the dead investigators. Tsuneyoshi appeared to have no qualms about the horrors which occurred within the Sunlit Garden, and held interest in preserving the Washuu bloodline through raping his daughter Rize Kamishiro, continuing the traditions of his clan, indicating that he is an incestuous rapist. As the head of the clan, Tsuneyoshi had children with numerous women, both humans and ghouls. The nature of the relationships appear to be non-consensual from the women's side. As the head of CCG, it was his mission to exterminate all ghouls, which was ironic, since he was a ghoul himself. That implies that both he and the rest of the Washuus had a deep hatred for their own kind and used the investigators to hunt down and kill numerous friendly ghouls such as Ryouko Fueguchi and Hikari Kirishima. It is implied, however, that he did have a caring side for his illegitimate son, Kichimura Washuu, as seen in a flashback, although the truthfulness of this flashback is ambiguous.

Tsuneyoshi summoned Itsuki Marude to hear the actual conditions of Aogiri Tree but then asked him to leave since there was no news. He also asked him to hurry, fearing the increase of victim numbers.[4] He was also mentioned to have appointed Kishou Arima and Juuzou Suzuya as ghoul investigators, recognizing their potential.

As his son and Kishou Arima appeared before him, they discussed the results of the Owl Suppression Operation in the 20th ward. Tsuneyoshi was seen holding a piece of paper with Kaneki's profile crossed out and marked as "Erased." He spoke to Arima informing him the "ownership rights" were his and asked him what he would do about the name. Arima replied that he would entrust it to "him" addressing to a particular someone.[5]

In Tokyo Ghoul:re, he informed Special Class Koori Ui about his exchange with various vice-presidents of the companies under the Tsukiyama Group. He asked the Special Class to run a Rc examination for everyone in the Tsukiyama parent company and its affiliates, suspecting other ghouls to be hiding within the company. With that, the Chairman authorized Koori Ui to lead the Tsukiyama Family Extermination Operation.[6]

He was killed by his illegitimate son Nimura Furuta after the Third Cochlea Raid, along with other members of the Washuu Clan in his office.[3]

In his teen years, Arima was admitted as a Rank 3 Ghoul Investigator on the Chairman's orders. He trusted Arima and placed him in high regard. He was confident in Arima's abilities as evidenced by the fact that he summoned him along with his son to discuss the situation regarding Ken Kaneki. He was also the only one to address him by his first name, "Kishou," rather than "Arima," fitting since Arima was his son, and the only one of his other children he interacted with besides Yoshitoki and Nimura. Unknown to him, Arima was plotting against him and was the secret One-Eyed King and worked with Aogiri Tree to destroy V.

In contrast to Arima, he did not recognize Souta as his kin as noted by Eto Yoshimura. Furuta stated to Uta that his father could not even recognize him. Due to this, Furuta did not have any hesitation in killing his father and other relatives (except Matsuri) to usurp control of the Washuu Clan. However, as shown in Furuta's flashback, Tsuneyoshi had a caring side towards his son, sitting with the boy as he looked at the Washuu Clan family tree, explaining mournfully the reason for the clan's short lifespans. However, the authenticity of this tenderness is never explored, and as such may simply be an act.

As a member of the CCG, he apparently considered her a notorious Ghoul offender due to her voracious appetite. She is his biological daughter, raised to be a breeding slave for the branch family of Washuu Clan, whom he intended to rape and impregnate in order to preserve the pure ghoul Washuu Clan bloodline, leading to her running away from her family.

His full abilities are unknown, though he was famous in his youth for having the strength to defeat SSS-rated ghouls in battle.[4]. Along with the rest of the pure ghoul Washuu Clan members, he is also a natural born kakuja.