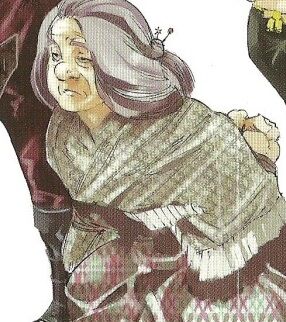 Void: Chapter 2
Tsumugi Yamagata (山方 ツムギ, Yamagata Tsumugi) was an elderly human woman that worked as a tailor and mask-maker. She was a long-time friend of Uta and Yoshimura, providing her services to ghoul clients.

Tsumugi was an elderly woman in her 80s, hunched over and often described in unflattering terms by others. She claims to have once been an attractive young woman, although it is unknown whether this was true or simply a joke.

Yamagata is portrayed as an elderly woman who doesn't care much about most things anymore. She is uncaring towards Uta and Asa for being ghouls, treating them the same as humans with unique personalities, and mentions that even if they wanted to eat they probably wouldn't want to eat a wrinkly old lady such as herself.

When Asa was handed a picture of a ghoul mask by Morimine, she consults her idol, Uta, about it and is led by him to Yamagata's residence. Yamagata greets the two ghouls at first, but tells Uta he doesn't need to pry into her business after saying the mask was indeed made by her. When she asks the two ghouls to leave, Uta and Asa insisted on staying to check the embroideries for inspiration and to follow Uta, respectively. Yamagata criticizes Asa's roughly made mask, to which the young ghoul argues that the old woman just can't see good work despite knowing the criticized points were accurate.

Yamagata lets Asa practice busywork as a means to have the ghoul strengthen the basics of sewing over the few weeks, during which she silently decides to let Asa stay after learning her situation of being homeless and orphaned since long ago. While Asa originally detested Yamagata for being a human and only stayed because of Uta's frequent visits, she ends up staying and bonding with the old lady eventually, to the point that they'd go shopping for meals together daily. When a fellow elderly lady mocked Yamagata as a lonely grandma abandoned by her former rich boyfriend, the tomboyish Asa scares off the lady in pretense of being Yamagata's boyfriend, which led the pair laughing at the surprised face of the other lady.

Weeks pass by as she lives with Asa in the same routine, before Renji Yomo shows up and informs her of her former boyfriend's hospitalization. After rushing over along with Uta and Asa, she confesses making masks for the man's adopted ghouls who harvest human meat for his hobby of cannibalism. As they were leaving, Uta senses the adopted ghoul son stalking them, to which Yamagata tells him to pay no attention to and Uta obliges. Shortly after parting with Uta, Yamagata and Asa are attacked by Noyama; Yamagata is mortally wounded and Uta appears to scare the hostile ghoul off before he could also finish off Asa. Yamagata slowly dies as Asa breaks down in tears begging for her to live as she has come to love her despite being of different species.

Uta later reveals to Asa that Yamagata has left her properties to her, with which she can reopen the shop and sell her own masks in the future.

Yamagata is skilled at embroidery and mask making, to which even Uta expresses awe in her abilities as fellow artists.

The two are long-time friends, and have a deep respect for each other as fellow artists. Tsumugi is a mentor to the younger man, and teases him about his "awful" artistic style. Tsumugi trusts Uta a great deal, and chooses to believe people that he'd bring with him to her place.

Initially, their relationship is very poor thanks to the young Ghoul's bad temper. But Tsumugi begins to teach the younger woman about sewing and craftmanship, under the guise of forcing her to do busywork. She begins empathizing and opening up to the stubborn ghoul after learning that she's homeless and orphaned at a young age. They develop a strong bond, almost becoming like family in the time they knew each other. After her death, she left all her properties to Asa and allowed her to begin a new life.

When they were young, the two were lovers. Though aware that he was a cannibal that preyed on young women, Tsumugi admits to finding his bold nature attractive. Eventually, they grew apart and went their separate ways.

The two have known each other for some time and they have great respect for each other.