The Tsukiyama family (月山家, Tsukiyama ke) is a family of upper-class Ghouls, with considerable wealth and influence within human society. They ran the Tsukiyama Group (月山グループ, Tsukiyama Gurūpu), a powerful international Business Conglomerate, with holdings in most sectors and ownership of more than 20 subsidiaries. Originally a Zaibatsu, the family rearranged after the second World War with a specialty in Imports and Exports. Their sphere of influence includes Food, Precious Metals, Iron and Steel, Chemistry, and holdings in private hospitals and Seinan Gakuin University. As such, they had incredible clout in human society and have used their political, business, and financial influences to conceal themselves for more than a century.

However due to a history of consanguineous marriages, the family seem to have inherited a genetic defect that affects the way cannibalism changes their bodies.

They became the focus of an Investigation by the Commission of Counter Ghoul under the code name Rose (ロゼ, Roze), after it is discovered that a survivor of the Rosewald family is among them.

Their group is eventually exposed, as a result of Shiki Kijima kidnapping and torturing two employees from the manor staff. After being exposed, Tsuneyoshi Washuu authorized an extermination operation which resulted in the family's near destruction.

The family owned an estate located in the 21st Ward, as well as numerous residential and commercial properties throughout Tokyo.

Servants of the family wear distinct uniforms, depending on the duties they are carrying out. While some servants wear the black and white uniforms standard for maids, when carrying out their domestic duties the others pair a dress shirt with a striped vest and geometric-patterned slacks. When hunting for the household, members dress in dark-colored trench coats and wear a widow's veil over their faces to conceal their identities. At least one member of a hunting party carries a large suitcase for transporting victims back to the manor. 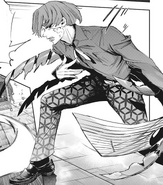 Kanae using his kagune while in uniform. 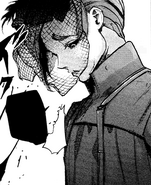 Kanae in the hunting uniform.

Matsumae in the hunting uniform.

There are currently two known Branch Families, the Rosewald family and the Johannes family.

The Tsukiyama Group is an International business conglomerate, with holdings in numerous industries and numerous companies under their control.