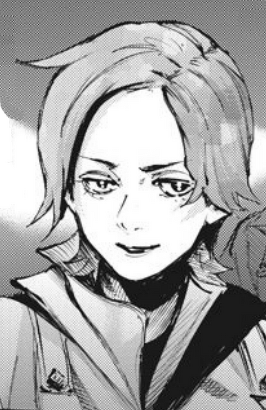 Kyle Phillips
Touma Higemaru (髯丸 トウマ, Higemaru Tōma) is a Rank 3 Ghoul Investigator and one of the second batch of recruits to the Quinx Squad. He comes from a wealthy family, involved in various life-saving duties such as emergency responders and the Self-Defense Force.

Higemaru is a short young man with wavy, light pink colored hair, and seemingly has the same moles under his eyes as Urie, alongside wearing gloves much like his squad leader.

Higemaru seems to have a playful and energetic nature. He is displayed as hardworking, as he is usually willing to follow his superiors orders.

Higemaru was first introduced fighting Aogiri Tree members alongside his squad. He expressed his admiration towards Kuki Urie and Saiko Yonebayashi, however he seemed to have a rivalry with Ching-Li Hsiao.[4]

He along with the rest of his squad were assigned to the operation to exterminate the ghouls of Rushima. Their squad was ordered by Matsuri Washuu to eliminate the remaining ghouls on the beach.[5] Five days later, he and his squad were still on the island searching for Tooru Mutsuki.[6]

With Urie in the lead, the Quinx Squad arrived[7] in the middle of the fight between Floppy and Mutsuki. Urie ordered them as they attacked in a set strategy. Shinsanpei Aura stabbed Floppy in the back, and yelled to Higemaru so he would make the attack in time from their target's front side. Using his kagune, he pierced either side of Floppy's pectoral region. Unfortunately, Higemaru broke the chain of attacks as he was too close for Saiko to finish Floppy with her own kagune, causing Higemaru to be knocked unconscious to the side by the ghoul.[8] After waking up from the attack, Higemaru tried to buy Aura some time to heal his leg, and activated his frame 3 kagune and attempted to subdue Amon's kakuja form. However, after Mutsuki had made his attack, Higemaru was powerfully slammed into a wall, incapacitating him for the rest of the battle.[9]

Higemaru was briefly seen by Aura's side when Saiko mentioned that the latter was pretty mad about what happened to his aunt, Kiyoko Aura.[10] Later, he and his squad held back the Clowns in the 16th ward when they began their coordinated attack against various wards.[11] Higemaru was informed about Takeomi Kuroiwa's engagement to Yoriko Kosaka by Saiko. Higemaru asked Urie if he was interested about Takeomi's marriage, who replied he was not really interested while his mind was occupied by it.[12]

The Quinx Squad and the local fire department were responsible for handling the Clown arsonists in the 2nd ward during the Clown Siege. Higemaru and Saiko killed Clowns with their kagune on top of a truck, while talking about Hsiao's battle suit and not letting the Clowns get past the defensive line.[13] As the battle raged on, Higemaru attacked a Clown throwing Molotov cocktails on a firetruck ladder, slicing his head in half. He encountered his uncle, who asked if he and Urie could help out the firefighters in dealing with the swarming Clowns. On their way to the burning area, Higemaru's uncle talks about the Higemaru family, their strong sense of justice, and how he first wanted to stop Higemaru from becoming an investigator, but decided not to after learning how noble the profession of a ghoul investigator was. He then asked Urie to raise Higemaru into a fine young man, leading to Urie's realization that it was also his responsibility to raise the next generation, before Higemaru's uncle was struck down by a kagune and killed from inside a building. Higemaru shouted for his uncle while Urie calmed him down, and the two of them started investigating the building to uncover the culprit. The two encountered Donato Porpora, who greeted them. Higemaru responded affirmatively to Urie's order to stay focused, without even realizing that his right arm had already been sliced clean off.[14]

Shocked by the amputation of his arm, Higemaru writhed in agony on the ground. Urie tried to combat Donato, but was restrained to the ceiling by his kagune. Defenseless, Higemaru had his arm torn off by Donato while Urie watched on helplessly.[15] Urie managed to break free during a conversation with Donato and gripped him from behind, telling Higemaru to go. Higemaru then made his escape and ran out of the building.[3] Higemaru managed to find Saiko and Hsiao to inform them where Urie and Donato were before collapsing due to his injuries. Saiko and Hsiao called a medical team for Higemaru and proceeded to find Urie.[16] After Saiko and Hsiao managed to put a berserk Urie under control, the two decided to check up on Higemaru.[17]

After the Clown Siege had ended Higemaru watched along with the rest of the Quinx while the newly instated Oggai executed the clowns and a fake Haise Sasaki.[18] Later, Higemaru along with the Quinx participated in Takeomi's wedding party.[19]

He is engaged in nurturing the next generation. He aided in strengthening the collaboration between the TSC, the police, and the fire departments.

Higemaru states that their squad leader is cool.

He appears to admire Saiko, and looks up to her as a superior, unlike the rest of his squad he was the one who caters to her whims, massaging her shoulders and praising her strength.

Higemaru and Hsiao have quite a competitive relationship, possibly due to their clashing personalities.