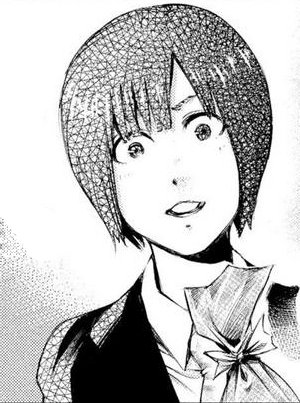 Chapter 56
Touko Harima (張間, Harima) was a student at CCG's Academy in the same year as Koutarou Amon [1] who was killed in the line of duty.[2]

The quinque Doujima 1/2, which was wielded by Amon, is a memento left by her.[3]

Harima seems to have had shoulder-length brown hair and dark eyes. 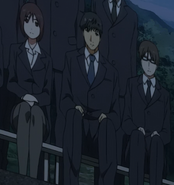 Photo of Harima in the academy.

It is mentioned that Harima was a cheerful and kind woman. In the anime, it is also stated that she was intelligent and strong-willed.

Harima died during a Whack-a-mole operation in the 24th Ward [4].

Nothing is known about Harima's abilities as she was never shown in combat. According to Koutarou Amon though, only excellent new investigators are sent to the 24th ward.

Her quinque, Doujima 1/2, is a weapon best suited for physically powerful attacks.