For the character of the main series, see Touka Kirishima. 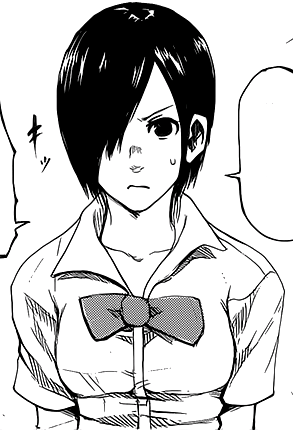 Oneshot
Touka (董香, Tōka) is a ghoul and a waitress that works part-time at a coffee shop. She appears in the prototype Oneshot for Tokyo Ghoul.

Touka is a slim young woman in her teens, with dark hair kept in a chin-length bob. Her bangs are swept to one side, covering her right eye completely. She is seen wearing either her school uniform or her waitress's uniform.

Touka pretends to be an ordinary girl, easily frightened by scary stories or unusual incidents. However, she is actually a vicious predator responsible for a series of brutal killings in the area.

Touka observed a pair of men who frequented the cafe, and wondered if they were policemen. Kaneki told her that they were ghoul investigators on business, and revealed that he was a ghoul in order to tease her. After being reassured that this was a lie, Touka shared how a suspicious pair of men tried to convince her friend to go with them several days prior. The news reported on ghouls targeting young women, frightening her friend so badly that Touka could not convince her to go out for several days.

The manager of the cafe brought the pair sandwiches for lunch, and Touka protested that she was not hungry. When this failed, she claimed to be on a diet and stated she had been eating too much recently. She agreed to only eat a very small amount, to satisfy the manager.

Several days later, while stalking Shinohara to kill him, Kaneki stopped Touka at the subway station. As he passed her, she recognized him and followed the pair into the parking garage. Touka witnessed the battle between the two men, and attempted to intervene to protect her coworker. Kaneki took her hostage and threatened to kill her, but Shinohara attacked them both while calling her a "necessary sacrifice." As he attacked, Touka caught his hand and slashed him across the face. She mocked him, stating that her ninth victim that month would be an old man—revealing herself to be the binge eater who had been terrorizing the area. With her help, Kaneki killed Shinohara.

Afterwards, the pair watched the news reporting on the death of a veteran ghoul investigator. Touka worried about her inability to control her appetite, and was grateful when Kaneki reassured her this would pass as she grew older. Later, the two practiced eating sandwiches together.