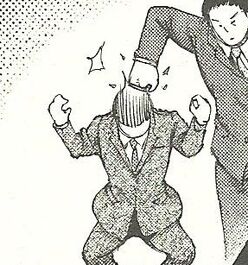 Days: Chapter 1
Toujou (東条, Tōjō) is a Rank 2 Ghoul Investigator assigned to the 8th Ward, and the partner of Yanagi.

A few weeks after the 11th Ward Battle, he was assigned to the 8th Ward with his senior, Yanagi, as backup support. He later gets kidnapped by the ghoul Koharu Utsumi, thinking she was inviting him to a romantic dinner. After being freed by Koutarou Amon, he succeeds in shooting her down, albeit it being accidental discharging of ukaku bullets as his quinque was broken by then.[1]

As a Rank 2 Investigator, Toujou is just a rookie in the CCG. He was lucky enough to get a personal ukaku quinque that allows him to fight in long range, however he has not mastered it yet and so misses quite often.