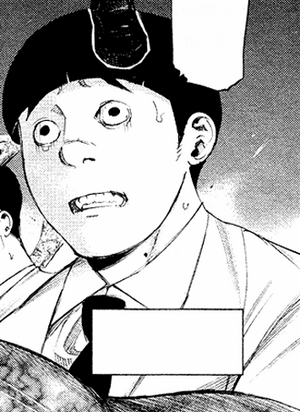 He has round eyes with a noticeably large nose and sports a bowl cut.

Kurumatani does not handle stress well, becoming fearful and panicky in the face of dangerous situations or unknowns. He leaves the risky tasks to his comrades, providing long-range support out of dangers way with his ukaku quinque.

Kurumatani participated in the lab raid led by Special Class Shinohara to the lab central, where they encountered Ken Kaneki's incomplete kakuja form. He stayed back with Juuji Isoyama as support while Shinohara fought.[1] Kaneki's speed unfortunately causes him to miss all his shots with Aburagama.[2]

They had given up when Shinohara was defeated, but were relieved when Koutarou Amon arrived on scene.[3]