Tokyo Ghoul (, Tōkyō Gūru) is a TV anime produced by Studio Pierrot based on the manga of the same name.

The second season, titled Tokyo Ghoul √A (√A, Tōkyō Gūru √A), began airing on January 9, 2015. Unlike the first season, which followed the original manga, the second season was advertised as an alternate story spun by Sui Ishida for the anime.

A third season, titled Tokyo Ghoul:re (:re, Tōkyō Gūru:re) and based on the manga of the same name, began airing on April 3, 2018. It takes place two years after the events of Tokyo Ghoul √A.[2] It was followed by a fourth season on October 9, 2018, which concludes the series as a whole.

The story follows Ken Kaneki, a college student who barely survives a deadly encounter with Rize Kamishiro, his date who reveals herself as a ghoul. He is taken to the hospital in critical condition. After recovering, Kaneki discovers that he underwent a surgery that transformed him into a half-ghoul. This was accomplished because some of Rize's organs were transferred into his body, and now, like normal ghouls, he must consume human flesh to survive. The ghouls who manage the coffee shop "Anteiku" take him in and teach him to deal with his new life as a half-ghoul. Some of his daily struggles include fitting into the ghoul society, as well as keeping his identity hidden from his human companions, especially from his best friend Hideyoshi Nagachika. 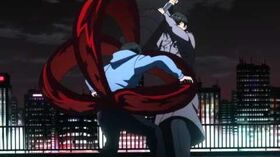 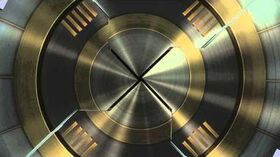 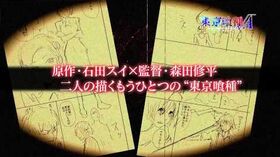 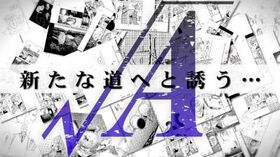 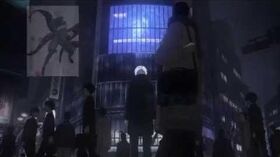