The game focuses on the conflict between ghouls and the CCG and players can choose from a wide variety of ghouls and investigators to construct their own dream team.

Players create a party with the options of ghouls, hybrids and ghoul investigators from a roster of over fifty characters. Missions are completed to progress through the game and gain skills, items, etc. Each mission lasts a few minutes and is given a rating at the end based on the player's performance. Players can play solo or in co-op. In single player story mode, players go on an episodic journey where they will face an onslaught of human or ghoul foes in real-time action-RPG combat. The game also features two multiplayer modes where players can either participate in a traditional player vs player mode or a MOBA inspired mode. In this mode, players will participate in 1v1, 3v3, or 5v5 matches against other players.

Amon stunned in a fight 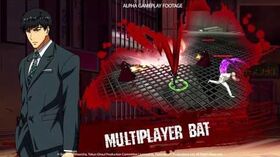 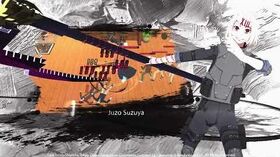