View source
watch 01:52
Who is Tatara?
Do you like this video?
Play Sound 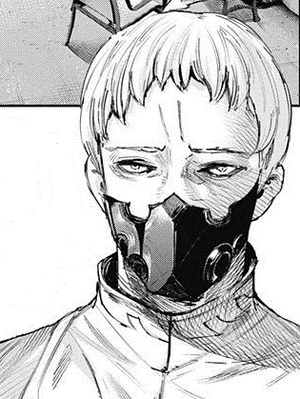 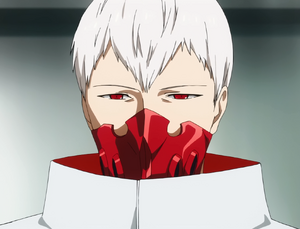 He was from China and a former member of the Chinese ghoul organization Chi She Lian.[7][8]

Tatara was a tall man with short white hair and red eyes. He hid his mouth with a red iron mask, and was seen wearing a white cloak most of the time. When he was first seen with Eto, he was wearing a large blue cloak. 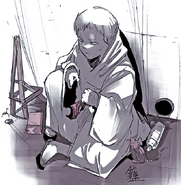 Tatara as a child. 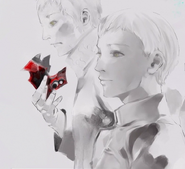 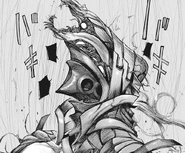 As one of the Aogiri Tree leaders and a trusted subordinate working under the One-Eyed Owl, Tatara came off as a rather loyal individual. He was portrayed as composed and stoic mostly, and carried himself with an effortless proud, commanding gait. He often monitored the activities of the Aogiri executives who killed in cold blood when embarking on a mission. He was also proud of his immense stamina when fighting and the accuracy of his calculations as well. Tatara seemed to have a taste for precision; as shown when he turned down Kaneki considering he was an artificial one-eyed ghoul. He held a grudge against Kousuke Houji, as he was one of those who killed the members of Chi She Lian, including his brother.

He has also been noted by Ayato Kirishima to consider his underlings to be mere peons, something he willingly confirmed.

After Ken Kaneki was captured by Yamori, Nico, and Ayato Kirishima, Kaneki was brought before Tatara. Tatara pierced Kaneki's abdomen so Kaneki would activate his left kakugan. Because Kaneki's "eye" was no good, Tatara decided he could not use Kaneki. He gave him to Ayato so he could use Kaneki however he wanted. At the end of the meeting, Tatara left with Eto because their comrades were waiting for them. Tatara left the 11th Ward Base to Noro. Tatara predicted that the Doves would come soon and told Noro to follow their plan.[9]

While the 11th Ward Battle was taking place, Tatara and Eto led many of Aogiri's strongest members in an attack on Cochlea, freeing multiple dangerous ghouls.

Tatara interrogated Taguchi about Kanou's whereabouts. Tatara then left the room and gave a foot to Naki, which presumably belonged to the nurse.[10]

Nearing the end of the Owl Suppression Operation, Tatara attacked the reinforcements brought by Seidou Takizawa, claiming that the "King" was going to pass by. Tatara was then attacked by a panicked Seidou but effortlessly grabbed him by the neck while recognizing Houji's quinque. Tatara then threw him only for Noro to bite his arm off. A furious Amon charged at Tatara right afterward. Tatara simply activated his kakugan and remarked his approval.[7] After the events of Route V14, Tatara knelt down before the King as he dragged a defeated Kaneki behind him.[3]

He led the Aogiri Tree attack on the Quinque Steel Transport and ordered a retreat when the attack had failed.[11]

After all of the Aogiri members escaped from Zeum hall following the raid, Tatara was in the greenhouse during an important meeting where Ayato was trying to convince him to attack Cochlea and rescue Hinami Fueguchi. Tatara rejected the claim and Takizawa started laughing at Ayato for having affection for her and then stated that he fought her. Ayato got furious and then Tatara grabbed him and prevented him from starting a fight. Tatara then berated Ayato for his actions while Seidou continued to laugh in the corner.

Tatara visited Dr. Kanou in his lab and listened to Kanou theorize how he will be able to apply ghoul surgeries with a very high success. He is then thanked by Kanou who said that he would need more corpses for his experiments. When Kanou expressed his wish to speak to Eto, Tatara simply said that she was busy and that a person like him should not nose into something he was not supposed to.

On Rushima, Tatara looked into the distance, while Eto held her final press conference.[12]

Tatara stared onward as Houji and his squad of investigators approached him. Before engaging Houji, Akira, and the accompanying squad in battle, Tatara stated that it would be the end. Tatara displayed his hatred for Houji and revealed his kakuja, noted as similar to that of Yan, and then fended off the rest of the squad with its unique flame. He then engaged Houji one-on-one. Houji masterfully avoided Tatara's strikes and successfully hit Tatara with his quinque. However, Tatara almost teleported towards Houji, ready to blast him into flames, only to be interrupted by Takizawa.[5] Tatara was overwhelmed by Takizawa's attacks, who blasted him with multiple ukaku shards and struck his abdomen. Takizawa then stabbed Tatara's head with Yumitsu Tomoe's quinque and finished Tatara off by piercing him with his Owl kagune. While dying, Tatara reminisced about the Anteiku raid, wondering whether Arima acquired what he was looking for as he let Arima walk through while he dragged an unconscious Kaneki.[3]

Tatara was close to Fei and his older brother, Yan, when he was younger and a member of Chi She Lian. Their deaths were the reason why he hated Kousuke Houji, to the point where he easily lost his near unflappable composure upon encountering even a quinque associated with the ghoul investigator. However, the quinque was implied to have been made from one of the two.

Their true relationship was a mystery, though it was clear the two worked closely together. Eto was almost always seen at his side, and they frequently discussed matters pertaining to the organization. He seemed to value her counsel, and readily answered any questions she may have had for him. Because of the many mysteries surrounding Eto's role in the organization, it was unclear who had greater authority over the other. Before his fight, with Houji and Akira, he thought of Eto claiming everything ended that day, implying a deeper relationship between the two.

While they're never seen to interact, Tatara has a deep respect for Arima. His loyalty to the One-Eyed King was shown as Tatara knelt before Arima as the latter was dragging an injured Kaneki after the events of Route V14.

Noro was the other subordinate of the One-Eyed King and followed Tatara's commands. An omake suggested the two are actually close, as Eto noted that Noro would be sad if something were to happen to Tatara.

Tatara was the one to recruit him into Aogiri, after the young ghoul's violent activities caught his attention. The two were not particularly close, as Tatara simply viewed him as another subordinate to be used. However, tensions had emerged between them as Ayato had grown more independent and influential within Aogiri. Tatara violently reprimanded him and accused him of cowardice. However, Tatara was somewhat bothered by the fact Ayato was growing up.

Tatara did not care what Yamori's activities were, showing no sadness at the news of his death reaching him.

Tatara did not seem to have any concern for them, as shown when he answered yes to Ayato's question about him considering his own subordinates to be mere pawns.

During their initial encounter, Tatara labeled Kaneki as both useless and a fool. Having made this decision, he discarded him, a crucial mistake that came back to haunt Aogiri. Later on, Eto criticized him for not killing Kaneki when he had the chance.

Though a mere human, Tatara seemed to have some respect for Kanou's work. They had a cordial, professional relationship once the rogue doctor joined forces with Aogiri and began performing experiments for their benefit.

Tatara had a fierce hatred for the investigator, losing his cool simply from seeing a quinque associated with him. Their exact history was not known, though it related to Houji's time spent in China destroying the ghoul organization Chi She Lian.

Tatara first became interested in the young investigator upon seeing his quinque, recognizing it as one that Houji had made from another ghoul named "Fei." He took his rage out on Houji's subordinate, handing him over to Noro as a snack. However, two years later, Takizawa was a one-eyed ghoul, one of those among the investigators Tatara provided to Dr. Kanou for his experiments.

Tatara appeared to think of Shachi as a coward, as implied when berating Ayato after the Auction Raid as growing soft due to Shachi's influences.

Ghoul Physiology: As a ghoul, Tatara has considerable superhuman strength, along with a kagune, like most ghouls.[7][13][14] 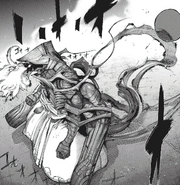 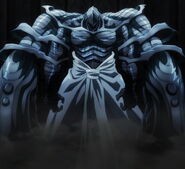