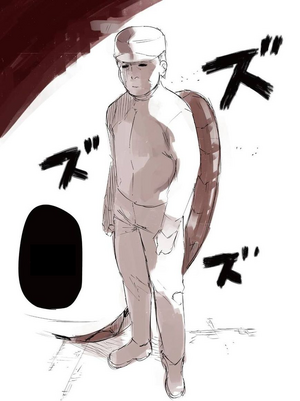 Jack: Chapter 3
Tanaka (タナカ, Tanaka) was a ghoul from the 13th ward who worked as a janitor at Seishin Senior High School. He was killed by Kishou Arima.

Tanaka was an average man with short hair and narrow eyes. His janitor uniform consisted of a simple button up shirt, jeans and a cap.

Tanaka was a very boastful individual as well as proud. He openly commended his own skill before facing Arima, believing he would win without knowing Arima's true ability.

Tanaka served as the janitor at Seishin High School for several months. One night, Tanaka unexpectedly attacked Ogata in an alley way in front of Arima and Taishi Fura.[1] Initially they suspected him to be the ghoul Lantern but that was not the case. While Tanaka egotistically spoke of himself, Arima brandished his quinque, and let it be known that he was a ghoul investigator, a fact that astonished Tanaka before Arima killed him. Later, his body was removed from the area.[2]

Ghoul Physiology: Due to his ghoul nature, Tanaka had a koukaku kagune. Although Tanaka was an experienced ghoul, he was not a match for Arima when he was using his quinque, Yukimura 1/3.