Start a Wiki
Takeomi Kuroiwa (黒磐 武臣, Kuroiwa Takeomi) is a Rank 1 Peacekeeper, Iwao Kuroiwa's son, and a member of the Itou Squad.

Takeomi is a tall young man and resembles his father in that they both have distinctively thick eyebrows and significantly rounder eyes than other characters. He wears formal attire at work like other CCG members. 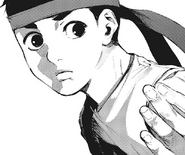 Takeomi as a child.
Add a photo to this gallery

Takeomi comes across as a humble and hard-working individual, though viewed by others as a prodigy with incredible potential and talent. Though aware of Sasaki's true nature, he does not display any of the prejudices typical of an investigator and expresses admiration for his talent. He states that he is always striving to improve himself, but does not come across as ambitious or proud. He is also quite simplistic; at the bakery Yoriko Kosaka works at, he nonchalantly proposes to her.

Takeomi assisted First Class Take Hirako and Rank 1 Kuramoto Itou in suppressing Haise Sasaki when he went out of control after the fight with Serpent.[2]

He later approached Kuki Urie to inquire about how Sasaki was doing. He seemed unaware of Urie's anger towards him and asked about visiting the Quinx Squad some time to speak to their mentor, Sasaki.[3]

He participated in the Auction Mopping-up Operation as part of the Hirako-Shimoguchi Squad. The squad encountered members of the Clown gang and proceeded to fight them. He fought the ghoul Ganbo and defeated and killed him with his bare hands.[4]

One month after the operation, Takeomi and Itou attended the Christmas party at The Chateau.[5]

Takeomi was promoted to a Rank 1 Investigator in the CCG's spring ceremony following the Auction Mopping-up Operation. He congratulated Urie for his promotion, much to Urie's disdain. Shortly after Takeomi and Urie were approached by Takeomi's father, who congratulated both by patting them on the shoulder.[6]

He later tried to once again meet Haise Sasaki but missed him. He instead met Shirazu and Saiko. He and Shirazu talked about the current investigation before he was invited to eat together with the two Quinx. The three visited the Oasis bakery, where they met Yoriko Kosaka.[7] The two recalled old memories together from when they were childhood friends attending the same elementary school before Yoriko had to get back to work.[8]

He participated in the Tsukiyama Family Extermination Operation where he teamed up with the Quinx Squad to fight Noro. He saved Saiko from Noro's kagune.[9] In the continuing battle, he was knocked back by Noro's rampaging kagune and remained docile until the end of it.[10] He asked Mutsuki if he was okay, and stayed silent while observing the aftermath. Matsuri Washuu asked whether he could continue fighting as the One-Eyed Owl had appeared and more units were required to deal with the threat.[11]

He attended the burial of the fallen investigators. He stood in silence in front of graves, alongside Itou and Take.[12]

As members of Koori Ui's squad, Takeomi was briefly shown alongside Taishi Fura and Itou as they prepared to battle Aogiri Tree ghouls led by Naki and Miza,[13] and later Shuu Tsukiyama.[14] After Koori Ui had engaged with Tsukiyama in a brief moment before switching and allowing the Itou Squad to handle Tsukiyama, the first to attack the ghoul was Takeomi.[15] When Kaya Irimi blocked a hit meant for Tsukiyama, she first fought with Kuramoto then blocked Takeomi's sudden attack. Kaya left Takeomi to be handled by Tsukiyama, who broke Takeomi's quinque at the first strike before he kicked him and sent him flying a considerable distance. After standing, he was guarded and told to use one of Kuramoto's spare quinques.[16] After the battles, Takeomi was injured and had to lean on Kuramoto to stand upright. He apologized for his injury, but Kuramoto praised him instead.[17]

After the CCG Special Class conference, Takeomi speaks to Koori Ui about their next mission. He tells Ui that Urie predicted that the Clowns would be attacking the CCG Main Office next. He invites Ui to dinner, which he accepts. Ui, Saiko Yonebayashi, and Takeomi reunite at Oasis, a place Saiko notes that he frequents regularly. While their table is being served, Takeomi proposes to Yoriko, shocking his companions,[18] before she accepts. He had been fully prepared and brought his marriage registration form already completed, having Koori and Saiko serve as witnesses. He shared with Saiko that he had already asked both of his parents for their blessings beforehand as well. Following Yoriko's acceptance, they went directly to speak to her family.

Later, he and Yoriko visited a park after leaving from her parents'. Yoriko's curiosity prompted her to ask why he chose her to be his wife-to-be. Takeomi, taking words from his father to choose a woman who can cook, knew she could fulfill that, and believed she was a courageous and good-hearted woman. He felt he wanted to spend the rest of his life with someone like her. After Yoriko remembered her friend who had disappeared after the Owl Suppression Operation, he offered to search for her and Yoriko provided him with Touka Kirishima's name.[19]

Upon the arrival of masked Clowns in the 9th ward, Takeomi was among those dispatched there to resolve the situation and exterminated several of their members.[20] His squad was later reported to be dealing with a chaotic situation due to the damage caused by their target's use of explosives.[21]

Following the Clown Siege, Kichimura Washuu was appointed bureau director and made a spectacle of publicly executing "Haise Sasaki." Takeomi had closed his eyes to the beheading of his former colleague while standing with his fellow investigators.[22]

Shortly before the wedding ceremony, Mutsuki asked him about a photo he had of Yoriko and Touka. He shared that he was looking for her so she could be invited. Mutsuki then asked for the photo, vaguely stating he possibly knew the person.[23]

On the day of the wedding, he and Yoriko exited the hall as newlyweds as the attendees cheerfully celebrated their marriage. Takeomi stood by his wife, laughing, after her bouquet landed in the hands of Misato Gori.[24]

Takeomi is stated to be an exceptionally talented rookie, chosen to participate in large-scale operations. He excelled at the Academy, earning high marks and is considered to be something of a prodigy.

Superhuman Strength: Takeomi is part of the 0.01% of humanity who have physical powers that rival those of ghouls. He demonstrated the ability to fight and defeat ghouls barehanded, by killing Ganbo during the Auction Mopping-up Operation, without using a quinque.[4] Mentioned in an omake, Takeomi also has a grip strength of 100, twice the average of adult males.

Superhuman Speed: As a child, Takeomi was able to outpace the other students in race despite being several meters behind. It's unknown how fast he is now.

Superhuman Endurance: Takeomi was able to endure getting slammed into pillars by Ganbo, several times, with a force that damaged the pillars, without flinching or weakening his grip around Ganbo's neck.[4] He was also able to block and survive Noro's surprise attack, from the ghoul's separated lower body, without major injuries.[10]

Swordsmanship: Takeomi is a capable swordsman. Suppressing SS-rated Haise Sasaki, alongside his squad, after he lost control over his kagune.[2] He was also able to hold himself against members of the notorious Clown gang and blocked Ganbo's surprise attack from behind.[25] Furthermore, he was able to block strong strikes from Noro's kagune against himself and other people during his and the Quinx squad's fight against the SS~ rated ghoul.[9][10] 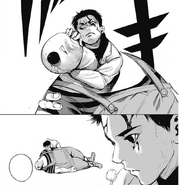 Takeomi's inhuman strength.
Add a photo to this gallery

Kuroiwa looks up to Haise as a competent investigator and displays interest in learning from him, as he believes Haise's swordplay is elegant and swift. It's unknown how he feels about Haise after the latter defected from CCG.

Their fathers were in the same squad together, suggesting the two have known each other for a long time. Takeomi treats him in a friendly manner and seeks him out for advice concerning Sasaki. He seems to be unaware of the intense hatred that Urie harbors for the entire Kuroiwa family, blaming them for the death of his father.

Takeomi was Yoriko's classmate in elementary school for several years, although he often transferred because of his father's duty. The two were reunited when he visited her workplace, and recalled their childhood friendship. [8] He begins to frequent her bakery, and eventually asks her to marry him.

Retrieved from "https://tokyoghoul.fandom.com/wiki/Takeomi_Kuroiwa?oldid=482837"
Community content is available under CC-BY-SA unless otherwise noted.