Edit
watch 01:14
Who is Take Hirako?
Do you like this video?
Play Sound 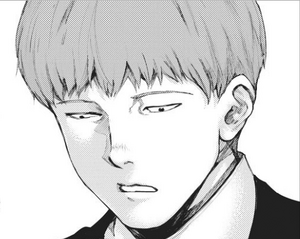 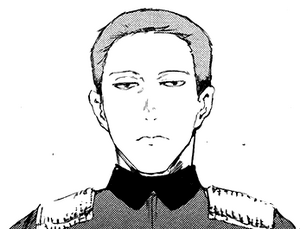 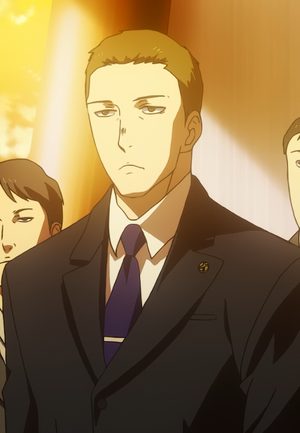 ""Mutual understanding" is not just "sharing everything with one another". That's what I believe."— Take Hirako, Tokyo Ghoul:re Chapter 101

Take Hirako (平子 丈, Hirako Take) is a former First Class Ghoul Investigator before resigning from the CCG. In the past he formed a duo with Kishou Arima.

He was in charge of the 21st ward and previously investigated the S-rated ghoul Serpent with his squad, but was later transferred to work alongside Arima again.

After the Dragon War, Hirako was asked to be the vice-chancellor of TSC's Peace Officer Academy but refused. He looked after his grandparents until they passed away and lives a normal life in the private sector working in a funeral home.

Hirako is of average height and his facial features have been described as "plain," or "bland." He usually has a blank expression on his face. Like all members of the CCG, he usually wore formal suits.

Like his mentor Kishou Arima, Hirako has a completely calm personality and has inherited the same cold and calculating approach to fighting ghouls. Despite this, he is against needless casualties and can question the consequences of the CCG's policies and the actions of its members, as he did when he berated Chuu Hachikawa who almost killed an elderly civilian willfully[4] or after the Owl Suppression Operation when he doubted the operation could be deemed a victory.[5]

This aspect continues after the timeskip when he provides a moderate voice that resolves the conflict between the Mado and Shimoguchi Squads.[2] Hirako also has a deep loyalty to Arima, he protected the blind side of Arima during battles as well as quit the CCG and began to aid Ken Kaneki's departure from Cochlea after Arima died.

While in the Ghoul Investigator Training Academy, Hirako's grades were seen as unremarkable. It was not until his partnership with Kishou Arima that he started garnering attention. His involvement in the extermination of the Clowns gang and the 24th ward investigations had established him as a reliable investigator and earned him a number of achievements. His collaboration with Arima continued for six more years before being promoted to First Class.[6] During those six years, he had accompanied Arima during the operation in the 4th ward where they first encountered Renji Yomo, who was taken by the Non-Killing Owl.[7]

Hirako participated in the operation against Aogiri Tree in the 11th ward as a member of the 11th Ward Special Countermeasures Unit.[3][8]

During the operation against Aogiri Tree, Hirako, and the group of investigators he accompanied, came across the supposed One-Eyed Owl — really the Non-Killing Owl. Itsuki Marude instructed Yukinori Shinohara to keep the "excellent yet expendable guys" with him to combat it, which, much to Hirako's dismay, included himself.[9] Later, while Shinohara and Iwao Kuroiwa were in the midst of battle with the Owl, Hirako took the initiative and joined in, despite knowing the outcome if he did. He had a short encounter with the Owl, and sustained an minor injury to the head but also managed to wound the Owl. The attack that he used against the Owl was notably similar to the one dealt by Kishou Arima against the Owl years before.[6]

Hirako was a part of Squad 3 that was led by Chuu Hachikawa. He was seen fighting with the Black Dog alongside other investigators.[10][11] After the group defeated the Black Dog, Hirako criticized Hachikawa for willingly attacking a civilian in battle, but the group was then promptly disrupted by Ken Kaneki's surprise attack.[4] Hirako had a brief scuffle with Kaneki until Kaneki managed to disarm Hirako by destroying his quinque, rendering him useless.[12]

As time passed, Hirako regrouped with a number of other stray investigators after the real One-Eyed Owl appeared, causing chaos. Hirako, and many others engaged the Owl in battle, during which he lost his quinque and borrowed Kousuke Houji's, only to be overwhelmed by the Owl's power. Hirako, and remaining survivors there, then withdrew from the fight as Arima stepped up in their place.[13]

Hirako was with Koori Ui recollecting the Owl Suppression Operation and the battle with the One-Eyed Owl. He questioned who the actual winner of the battle was, but he let go of his thought, saying he would just listen to the orders.[5]

Hirako and his squad, as well as Nobu Shimoguchi and Akira Mado with theirs, all participated in the investigator meeting pertaining to the Torso and Serpent investigations.[2] Much later — after Haise Sasaki and the rest of the Quinx Squad confronted Torso, and then later Serpent — Hirako and his team appeared on the scene after being called in. The team swiftly neutralized the unstable Sasaki while ignoring the fleeing Serpent, stating Sasaki took top priority.[14]

Matsuri Washuu called in Hirako, along with Shimoguchi and Akira, to participate in the upcoming Auction Mopping-up Operation.[15] During the operation, Hirako came across Uta, who still remembered him from the past when he went in the 4th ward with Arima.[16] After attacking Uta for a while without hitting, other Clowns and investigators joined in the fight. During the disruption, Uta formed the face of Arima, ordering Hirako to stand down. However, the sight of the Arima's face only provoked Hirako into immediately attacking Uta. He slashed Uta across the face as Uta stabbed Hirako's left arm with Juuzou Suzuya's knives. Uta noted Hirako's lack of hesitancy to attack, believing it implied the existence of Hirako's inner hatred against Arima. He continued to fight Uta in the rafters and was mocked for his stoic attitude, which remained unflinching even as Uta pushed the knives in deeper.[17]

When asked about Hirako's absence during the meeting, Kuramoto Itou replied had some matters to deal with in Human Resources. Sometime later while out drinking, Kuramoto revealed to Sasaki that since Ui was promoted to leader of S1, Hirako was chosen to take his place and support Arima as he was "the only one who could keep up." They were both uneasy about the change.[18]

Hirako was together with Kuramoto and Takeomi in the cemetery where members of his former squad were buried.[19]

Hirako accompanied Arima Squad throughout Cochlea and encountered Ken Kaneki leaning over Arima's dead body.[20] He attempted to refer to him as Sasaki, but instead called him "Ken Kaneki." He approached the ghoul, saying he did not want to fight him, noticing the wound on Arima's neck while calling Kaneki a terrible liar. He permitted the squad to say their final salutations to the dead investigator, and informed Kaneki that his job was to escort him out of Cochlea. Afterwards, he allowed Kaneki to say his final goodbyes as well.[21] As the group advanced towards Kiyoko Aura and Mougan Tanakamaru, the two investigators pondered over Hirako's actions. Hirako calmly pulled out a resignation notice, claiming he was no longer affiliated with the CCG while activating his quinque.[22]

In January, a month after the raid, Hirako took the 0 Squad children out to eat breakfast. Later during the meeting at Shuu Tsukiyama's, he defended Kaneki when the White Suits insulted Kaneki and their status as former CCG investigators.[23] He was approached by Renji Yomo who said that not all ghouls agree on Kaneki's plans to unite the two races mentioning that Arima killed his sister and that he still hated him. Hirako then replied with his past with Arima, and that now, he was dead and there was no chance for revenge. Afterwards, Hirako said that they believe in the same person, and that mutual understanding could be sharing everything with one another instead.[24]

Hirako and the 0 Squad face off against Oggai Squads leader Hajime and Koori Ui, aiding the escape of Touka.

After Kaneki is separated from the dragon and regains consciousness, Hirako and his colleagues fend off V agents. As the agents of V have been mostly subdued, Hirako is encountered by Kaiko, the latter whom turns out to be a formidable opponent. While Hirako is noticeably exhausted as Kaiko gains the upper hand in the duel, an unidentified creature suddenly enters the scene.

As the academy vice-head, he looked after his grandparents until they died. After that, he lived his life as a civilian. He continued to interact with Ui and Itou occasionally. He never talked about his occupation, but after talking to Itou, it is said that he works at a funeral home.

Hirako was partnered with Arima before, learning fighting techniques from him. He respected his former partner for his overwhelming strength.

Koori and Hirako were both former partners of Arima and share a friendly relationship. Through their work in the 0 Squad, they have trust in each others abilities, which resulted in combining their power to defend themselves from Kaneki's kakuja.

Uta and Hirako have clashed before in the past during an investigation in the 4th ward. Several years afterward, they meet again in the ghoul auction during the events of Tokyo Ghoul:re and it appears that Uta still remembers him, with Hirako likely remembering him as well, with his squad recognizing Uta as "No Face."

Hirako seems to have a calm relationship with him, even with the death of Arima he performs the last orders given by him, even to leave CCG and face Special Class members of this organization just to help him escape Cochlea and join in Kaneki's efforts to incite a revolution against V.

The two men have agreed to come to mutual understanding between them despite their differences and appear to have formed a friendly bond with each other.

As a former apprentice under CCG's most famous investigator Kishou Arima, Hirako has shown exceptional skills as both an investigator and as a combatant. During the Owl Suppression Operation, Kaya Irimi had noted that out of all the investigators that were fighting her, Hirako was the strongest out of them all despite his plain face. He was a member of the team that defeated Irimi, an SS-rated ghoul. While being strong, it has been noted that there was nothing special about his patterns despite his high battle prowess. Take has also been shown to have remarkable durability; when he had a barrage of knives lodged into his shoulder by Uta, he still managed to fight well.

Swordsmanship: Hirako's skills and proficiency in quinque usage was at a high enough level for Arima to trust him to cover his blind spot and hold critical positions in his squad's formations. 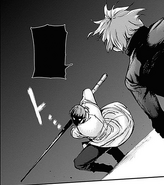