Edit
watch 01:11
Who is Taishi Fura?
Do you like this video?
Play Sound 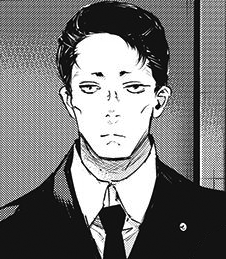 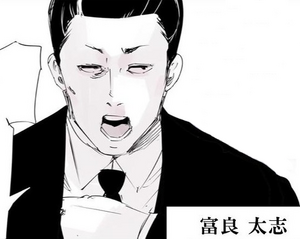 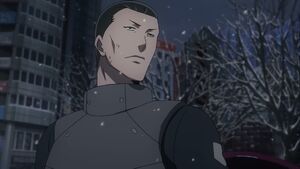 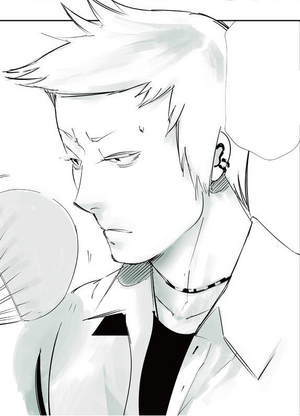 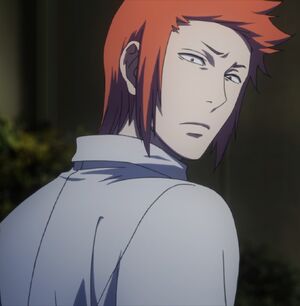 "It doesn't matter if you're an investigator. What we take away is nothing other than Life."— Taishi Fura, Tokyo Ghoul:re Chapter 42

Taishi Fura (富良 太志, Fura Taishi) is a First-Class Ghoul Investigator. He is the protagonist of the side story Tokyo Ghoul: Jack alongside Kishou Arima.

After graduating from Seishin High School, he pursued a career as a ghoul investigator and married his childhood friend, Aki Sasada. He is the squad leader of the Fura Squad and in charge of the 7th ward.

In his younger years, Taishi was a tall boy with orange hair and dark eyes. As a student, he normally wore the standard school uniform loosely, along with piercings on his left ear.

Later as a ghoul investigator, he has dark hair combed backwards and wears a suit and tie like other CCG investigators.

Fura during his adolescence.

Fura was quite a rebellious but determined teenager, being very boisterous and short-tempered. Because their personalities were so different, he and Arima often had trivial quarrels, accusing Arima of not being "normal" or living a "normal life." Taishi never liked school or studying, and skipped classes frequently. He seemed to be quite hasty and impatient as well, desiring to make a move at the slightest possible signs of a suspect, as expressed by the vengeance he wanted to take for his friends. He is also shown to care deeply about his comrades, holding a protective streak over them.

Fura's appearances in Tokyo Ghoul:re portray him as a veteran who is unfazed by most things, be it meeting arguments or actual battles during investigations. His early experiences with Arima and Minami have shaped how he views his professional life and ghouls. To him, working at the CCG is nothing more than being paid to take lives, as he views ghouls similarly to humans.

In his adolescence, Fura attended Seishin High School along with Arima. Though he never liked school, he usually went shopping and did all the housework since his mother never did. He had two childhood friends: Ryou, with whom he played baseball and Aki Sasada, a girl he had a crush on. After he stopped pursuing his baseball hobby, he joined a biker gang with Ryou and Aki.

Fura left the biker gang and began attending school more frequently after the appearance of a transfer student. When Fura happened to see Ryou and Aki speeding on the road, he decided to meet them when their gang happened to be targeted by Lantern. Ryou, protecting Fura who was overpowered, was killed and Aki lost her right eye to the ghoul. Witnessing his friend's tragic death, Fura swore vengeance, and pleaded with Arima, who was investigating Lantern undercover, to let him help with the investigation. At the end of this investigation, he and Arima dispatched Lantern, who turned out to be Uruka Minami, who had been helping them search for ghouls to exterminate.

After Kureo Mado's funeral service, Koutarou Amon observed how Fura had to quickly move out because a suspect had started to move. Fura noted that there was not even time to mourn.[2]

Fura led a CCG raid on the Ghoul Restaurant, only to find it already attacked and destroyed by Kaneki's group.[3]

He was later consulted by Koutarou Amon about the Black Rabbit and his activities in the 7th ward.[4]

Fura served in the raid under Mougan Tanakamaru's command, taking part in the fight against the Apes.[5]

In the anime, Fura battled against Kaya Irimi and Enji Koma's forces, and was later surrounded by Aogiri Tree, alongside six investigators with him. He then reported to the others that, with a smile on his face, Kishou Arima had arrived. Together with Mougan, Take Hirako, Kuramoto Itou, Chuu Hachikawa, and Ayumu Hogi, they took down numerous Aogiri Tree ghouls until Naki ordered a retreat.

Fura appeared at the S1 meeting alongside Koori Ui and Hairu Ihei. After the meeting, he and Haise Sasaki explained to the Quinx Squad members about Hairu's career.

Fura later took part in the ambush of Matsumae and her followers along with Hairu Ihei, Shiki Kijima and Nimura Furuta. Afterwards, he advised Hairu against her bad remarks.

When Sasaki brought up his idea of having the Quinx Squad posing as ghouls, Fura watched as Ui rejected the plan. Fura afterwards expressed his opinion on the plan being a good one, and accused Ui of shooting down the plan merely due to not wanting Sasaki to get more achievements.

Fura was later in favor of Sasaki's Mask Operation and helped pass the motion.

When Fura's squad encountered the White Suits, who were allied with Miza Kusakari and later Shuu Tsukiyama, he commented vaguely, not entirely conveying much emotion or reaction to the grave situation. When they battled with the ghouls, after the appearance of Kaya Irimi, or the Black Dog, she fought with Koori Ui and Fura took advantage of her small moment of distraction to charge her from behind. Following the conclusion of the Rushima Landing Operation, as Matsuri declared Arima's death, Fura mourned his friend's death with a tear from his eye, while calling him an idiot.[6]

He remains in the TSC and continues to work there. Thanks to his steady performance, he became an associate class investigator at 41 years old. Thanks to his daughter, he successfully quit smoking.

Fura and Arima are former classmates and they know each other well. Though the two grew close during their time hunting Lantern, over the years it seems the two have grown distant. Fura apparently seemed to understand his old friend well. However, when Sasaki questioned him about who Arima was as a person he dismally conceded he did not know much about his erstwhile partner. Nevertheless, when Arima was declared dead, Fura grieved for him and cried, showing he still cared for his old friend.

Aki, Fura, and Ryou were friends from childhood. After the death of Ryou, the two appear to have grown closer and eventually fell in love. They married at some point, and have a daughter together. He seems very happy in his marriage, and cherishes the time he spends with his family.

Taishi is a very proactive father and plays with his daughter, not holding it against her that his wife no longer allows him to smoke in their home due to Natsu's young age.

Aki, Fura, and Ryou were friends from childhood. Fura used to play amateur baseball with Ryou, but left behind the hobby to join a biker gang. Fura however quits the team by himself to begin attending school again. Despite all this however, Fura and Ryou still view each other as one of the most important people in their life.

Initially Fura viewed Uruka as a beautiful transfer student, and would begin attending more classes because of her. After saving her from a ghoul, they form a partnership with Arima to track down ghoul activites in which Fura is thankful but also sorry for her as Arima wouldn't let her tag along despite obtaining information from her. Moments before her death, Fura felt as if she does not qualify as a human due to her predatory side; he however later acknowledges her feelings and would recall killing ghouls the same as killing human beings in his later years.

Fura and Hairu are familiar with each other. Although he respects her power, he does not hesitate about advising her against making bad remarks.

Their opinions on Sasaki differ, shown when Fura opined that a plan formulated by Sasaki was a good one while accusing Ui of rejecting it so that Sasaki won't get more achievements. Despite these thoughts, the two continue to share a cordial and friendly relationship, sharing cigarettes with each other and fighting well as a team.

Fura seems to know him well. He also seems to have a more tolerant opinion of Sasaki than Ui does, even considering Sasaki's suggested plan to be a good one while accusing Ui of shooting it down due to not wanting Sasaki to get more achievements.

Fura is aware of his past behavior, resulting in him not allowing the investigator to approach his motorcycle. And for good reason.

Fura acknowledged and related to Shirazu's pain of not being able to use the quinque made from his first ghoul kill. He assured Shirazu that he would eventually be able to use it when the time comes.

As a First Class and someone who has fought ghouls for over a decade, Fura is a proficient investigator.

Swordsmanship: His skill in exterminating ghouls with a quinque is backed by the many years of experience he gained since his days as a teenager.