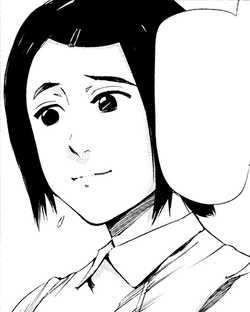 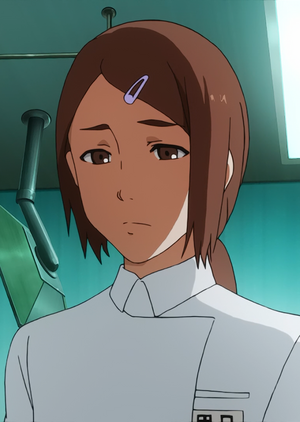 Taguchi was a slender, petite young woman with brown hair and brown eyes. Her hair was normally tied into a ponytail, with chin-length side bangs which fell to the sides of her face, also clipped in away from her eyes.

As a nurse, she wore the normal medical attire, which consisted of a white body-con dress with a piped collar, along with white stockings and white shoes.

Taguchi had a nice way of communicating with her patients, and showed deep concern for them when she sensed that something is wrong. Her benevolence may have been a facade as she appeared to have been aware of her superior's ghoulification experiments and lied to Ken Kaneki to prevent him from interrogating the doctor about the truth.

Taguchi was the nurse in charge of Ken Kaneki. Kaneki ate little because all food tasted disgusting to him. Taguchi asked him why he ate so little and tasted his meal, remarking that it tasted normal.[3]

Taguchi met Ken Kaneki's group at Kanou General Hospital, she lied to Kaneki saying that Kanou is busy, and has a research meeting in Germany, she then informs Kanou that Kaneki is visiting the hospital.[1] Suspected by Kaneki's group for her lies, she was confronted by them in an isolated area after exiting the hospital. She was later captured by an unexpected Aogiri Tree group led by Sachi after they defeated Kaneki's group. [4]

After being captured by Aogiri Tree, Tatara was shown giving a foot to Naki which seemingly belonged to Taguchi after she was questioned about Akihiro Kanou's whereabouts.[2]