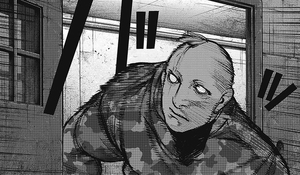 :re Chapter 99
Tago (タゴ, Tago) was a ghoul and a member of Goat. He was killed by Hajime Hazuki.

Tago appeared to be a largely build man with a large scar under his right eye.

He appeared to be a pretty straightforward person who loved to play games, he also was a friendly person and a friend of Fuka.

Tago was playing a card game together with another member of Goat while keeping watch over Goat's base in the 24th Ward until they were disrupted by a sound in another room. The three men then decided to take a look around but before Tago could discover what the sound was, he was suddenly attacked and killed by Hajime Hazuki.