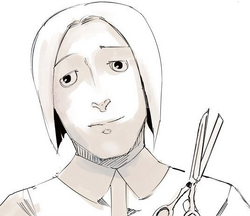 "My enjoyment... is eating the customer's hair... and 'imagining' pulling the hair follicles off the scalp, one by one the interior scalp meat, piece by piece... that taste. And thus, killing and eating those customers whose hair I come to like is honestly... to me, there's nothing better."— Sumiharu Katou, Tokyo Ghoul: Jack Chapter 4

Katou was a young man with blonde hair cut into a long chin-length style and dark violet eyes. At work, he wore a white polo shirt with a dark collar, otherwise he wore a tight black long sleeved shirt that reached past his elbows paired with white pants. His mask covered only the upper half of his face, and was a white color with a bulbous nose and furrowed brows. In the OVA, the mask looked more menacing, while in Tokyo Ghoul: Jack, it depicted a more sad, worried expression. 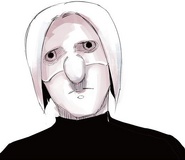 Katou was an extremely two-faced individual, concealing a sadistic personality behind a mask of kindness. His position as a hairdresser allowed him to target women, with him engaging in perverse rituals of eating their hair clippings while fantasizing about scalping them.

Katou first appeared at a meeting with Lantern and Yamori, discussing the rumors of a pair of students who were hunting ghouls.

At his salon, he cut the hair of a woman and later ate her hair clippings while having disturbing fantasies about killing her. He was visited by an unmasked Uruka Minami, who he did not recognize as Lantern and believed her to be merely a human. Because of her scent and beautiful hair, he decided to attack her in an alleyway shortly after giving her a haircut.[1] However, Kishou Arima and Taishi Fura intervened and killed him. After his mask fell off after his death, Minami recognized him as her hair stylist.[2]

Ghoul Physiology: Katou was born a ghoul, therefore he inherited a kagune and the abilities of regeneration and superhuman speed. 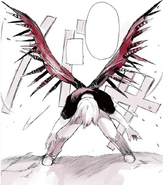