Sui Ishida was born in Fukuoka on December 28 1986. Not much is known about his life before the publishing of Tokyo Ghoul. He stated on social media that as a child, rather than reading he was "constantly swinging on horizontal bars", which means he was very likely athletic. He also worked as an tattoo artist before being a mangaka.[1]

He stated in his blog that he started to live in Fukuoka in the first half of 2012.

In 2010 he won the Young Jump 113th Grand Prix award with Tokyo Ghoul (東京喰種トーキョーグール, Tōkyō Gūru). In March 2011, the same oneshot was published in the 2nd Issue of Miracle Jump. And later in September 2011, Tokyo Ghoul started as a series in Weekly Young Jump 2011-41 Issue. In December 2011, he made another oneshot about Rize Kamishiro that was published in December 2011 in Miracle Jump 6th Issue, which was later collected in the fifth volume of Tokyo Ghoul.

In 2013, he also started Tokyo Ghoul: Jack in the digital magazine Jump LIVE.

After the ending of Tokyo Ghoul and around one month later in October 2014, the sequel manga, Tokyo Ghoul:re, was published in Weekly Young Jump and ended in July 2018.

In 2019 he started working in a otome game called Jack Jeanne, that was published in 2021.

In 2021 Ishida started to serialize his new manga, Choujin X, in an irregular release schedule in Tonari no Young magazine.[3] As he doesn't have to publish weekly anymore he started to have more time to publish his webcomis and produce other content, mostly in his YouTube channel.

Ishida is very open about his music taste. He puts references of it in his work and makes art of bands and songs he likes occasionally. He seems to enjoy J-pop and J-rock as he posted art of several groups, singers and albums of the genres on his social media, including works related to FANTASTICS from EXILE TRIBE, ano, Reol, Tokyo Gegegay and Queen Bee. He posted fanart of some K-pop groups as well.[4] He also seems to be a fan of the band Ling tosite Sigure as he named a Tokyo Ghoul chapter after one of their songs and personally requested their lead singer, TK, to sing the opening theme of the first season of the anime.

He is also a fan of the groups who performed the ending and opening themes of the anime, österreich and Amazarashi. He drew a cover for their albuns and made a cameo appearance in Amazarashi's music video of their song "Ending Theme".[5][1]

Ishida seems to be a fan of Attack on Titan as he made an art to celebrate the final chapter release. He also made some art of Tokyo Revengers, Naruto, Neon Genesis Evangelion, Final Fantasy and others.[6][7] He stated multiple times that he is a fan of Hunter x Hunter and studied Yoshihiro Togashi's style.[1]

Sui Ishida said that he liked playing games, such as Fallout and Orechika 2 before going to bed. He named one of his character, Abara Hanbee, after a Orechika 2 character and made a drawing of the the Quinx Squad, from Tokyo Ghoul, in the roles of characters from the game.[1] He also made gameplays of the games Heavy Rain, Hitman 3 and Resident Evil 8 in his YouTube channel.[8]

Ishida also likes to write poem that he posts along with his drawings in his Tumblr.[9] His work seems to be strongly influenced by the authors Franz Kafka (The Metamorphosis), and Antoine de Saint-Exupéry (The Little Prince) and a lot of times contains references and parallels.[1]

Ishida seems to be in good friendly terms with Atsushi Nakayama, fellow manga artist in Young Jump and author of Nejimaki Kagyu, who even drew a Tokyo Ghoul illustration as a gift for Ishida's birthday. Later Sui Ishida returned the favor, as he and other artists each drew an illustration for Nejimaki Kagyu's last chapter.

He also seems to be friends with Hanada Ryo, the author of the seinen manga Devil's Line. Once Ishida visited Ryo because he was feeling unwell and received a thank-you illustration by him. He said he would considerate the illustration as a friendart rather than a fanart.[1]

Sui Ishida seems to have a somewhat healthy lifestyle. He said on Twitter that he doesn't smoke, likes to go running sometimes and drinks a lot of Calpis.

Self-portrait in an omake 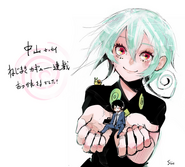 Tribute to vulgar comedian Egashira 2:50 for his 50th birthday. 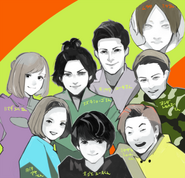 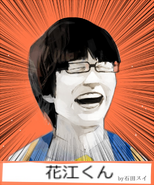 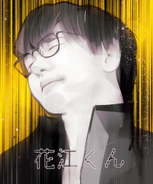 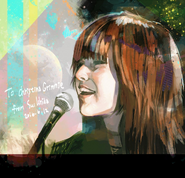 For actress, comedian, and musician Ano. 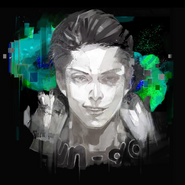 For producer and singer Kenshi Yonezu.

For singer and songwriter Seiko Oomori.

Mei from Another for Hiro Kiyohara's birthday.

Kaine from the game NieR. 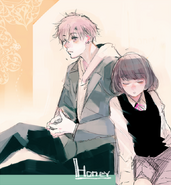 Nao Kogure and Taiga Onise from the manga Honey.

Hisoka from Hunter x Hunter, series he completed a one shot for. 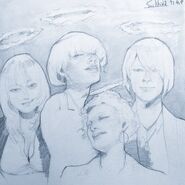 The four members of the band Queen Bee.

For the band People In the Box's members on their 10th anniversary. 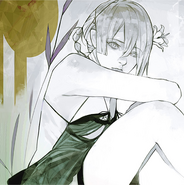 Kaine for cover of the NieR soundtrack. 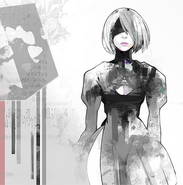 2B for cover of the NieR soundtrack.

For the mangaka Atsushi Nakayama, 2013. 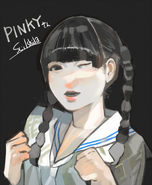 Shuten Douji from Fate/Grand Order during the Ibaraki Douji Event, 2016. 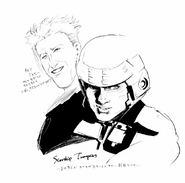 For the webcomic Failure Rider, 2010.

Actor Javier Bardem as Anton Chigurh in No Country for Old Men, 2013.

Miyako Aishima from Gojikanme no Sensou on Yū unexpected death. 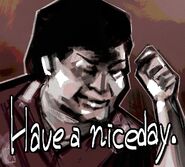 Gift illustration to his fan on Twitter who was sending him "Have a nice day" everyday.

Ryou Asuka and Akira Fudo from the 2018 anime Devilman Crybaby.

Character of Goubaru-kun (a staff member)

Eren Yeager from Attack on Titan.