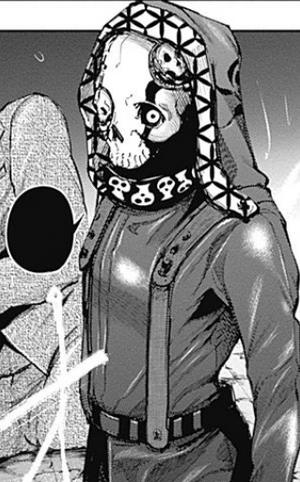 She wore a black hooded trench coat, with a decorative skull pattern trim around the hood and collar, with an elaborate skull-themed mask.

In her daily life, she was a pretty young woman with short hair. She wore a decorative pin on her bangs and appeared to have been a high school student. She wore a distinctive floral perfume.

Little of her personality was seen, though she appeared to be quite cocky and violent.

While investigating one of the gang's crime scenes, Juuzou Suzuya noted the presence of a floral perfume still lingering in the air.

She first appeared on a crowded subway train, with Hanbee Abara observing that a middle-aged man appeared to be molesting her. While he struggled to find the courage to intervene, Suzuya confronted the pervert and scared him away. He then orders them to disembark the train and follow the man, noting that he smelled like blood.

They came across the gang's leader, who had torn the man's dominant arm off. When they confronted her, she summoned her followers to attack them. Suzuya slaughtered them and brought out his main quinque to face the leader herself. However, he became distracted and she was able to disarm him — he watched passively while she charged him, forcing Abara to act to save his life. He impaled her from behind, killing her almost instantly. Afterwards, Suzuya removed her mask to see the girl from the train.

Abara was praised for bringing down such a dangerous ghoul, but later wondered what kind of person she was.

Ghoul Physiology: She was given an A rating by the CCG, implying she was a moderately powerful ghoul. She possessed enhanced regeneration and senses, as well as a kagune.