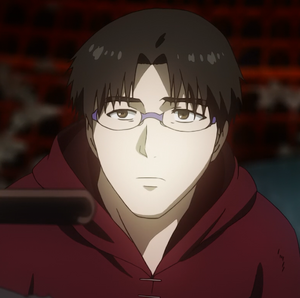 He wears the typical attire of Aogiri Tree's members.

After Yamori left Kaneki following a torture session, Haru and Shuu came and cleaned him up and the area around him. They relayed a message from Banjou that they will eventually save him. [1]

Soon after, both he and Haru were brought in front of Kaneki. While they trembled in fear, Yamori demanded Kaneki to choose one of them to die in order to save the other. Failing to choose someone, Kaneki watched as Haru was strangled to death by Yamori in front of Shuu, and was murdered soon after.[2]