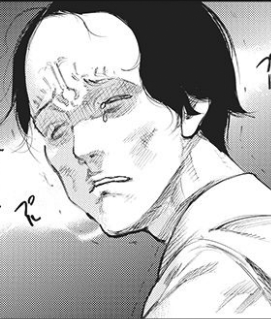 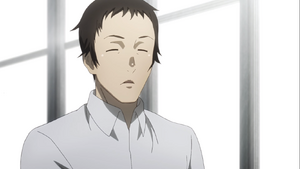 Shunji was a nervous looking man with short dark hair and a round face. He dressed formally in a suit. 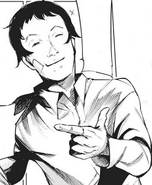 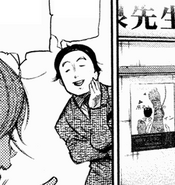 Shunji is cooked by Furuta.

Shunji was a fairly nervous man, often becoming flustered at the quirky behavior of his employer. He was also easily flustered, and cowered when actually faced with threats. Despite his cowardice he was trustworthy, since he kept Eto's secret after he discovered she was a ghoul for nearly a decade. His final action of suppressing information about Eto's final novel and ensuring it would have the widest possible distribution proved his bravery.

A decade prior to the series, Shiono was approached by Eto and given the 500-page manuscript of Dear Kafka. He initially brushed her off, giving her his business card and sending her away without bothering to read through her work. This turned out to be a mistake, because his superior soon came by and berated him violently for sending away such a talented writer. He was ordered to find the girl, though had no information to contact her.

In the following days, he encountered Eto coming to retrieve her manuscript. He berated her for not leaving any contact information, but was surprised when she told him she was an orphan. In order to start a business relationship, he gave her a cell phone and started working as her editor. Two years later, he helped her make her debut as "Sen Takatsuki."

One night, he visited her apartment to bring her snacks. Finding her asleep at her computer, he went to the fridge to put the food away and discovered numerous strange bins. Opening one, he found part of a human face and quickly replaced it in growing horror. Eto approached him from behind, revealing her kakugan and commenting on his pale appearance. However, Eto would spare his life and Shiono continued to protect her secret.[4]

Shiono managed one of Takatsuki's autograph events, trying to keep Takatsuki from straying off schedule.[5]

While waiting for Sen Takatsuki outside a building, he was approached by the ghoul investigators Haise Sasaki and Nimura Furuta, who inquired if she was available at the moment.[6] Because he would not disclose her whereabouts, he was taken into custody and placed into an interrogation room. Sasaki attempted to intimidate him into revealing where Takatsuki might be, threatening him with the death penalty for harboring a ghoul. When this failed to get results, he left Shiono alone in the room with orders for Furuta to attempt to play "good cop."[1]

Some time later, he broke under interrogation and confessed that Sen Takatsuki was a ghoul. Afterwards he was awakened from a nap and shocked to see Takatsuki had come to see him. Shiono collapsed in front of her, apologizing profusely and weeping in remorse for having sold her out. While being placed under arrest, Eto reassured him that she was not angry at him and thanked him for helping her become an author.[4] After his release, he did his best to ensure the publication of Takatsuki's last work, King Bileygr. He kept its contents under wraps for as long as possible and took actions to ensure that it would be distributed widely even after the book's contents had been revealed, even though he was aware that it would not be strange that its publication be stopped due to its controversial contents.[3]

Furuta visited Eto in Cochlea, bringing her a plastic container for her meal. He informed her that Shiono had been killed for his role in publishing her novel, and that he had personally cooked him into pâté as a "present" for her.[3] When she broke out during the Cochlea attack, she targeted Furuta to take revenge.[7]

He initially wrote her off, but quickly began working as her editor. Even after discovering she was a ghoul, he continued working with her and helped shape her into a successful author. He worried over her various quirks, and frequently lectured her over wasting time or being late to events, but nonetheless seemed to think highly of her. Surprisingly enough, this fondness seemed to be mutual. Eto kept him at her side for more than a decade, and trusted him with her secret and her career as an author. His cruel death at Furuta's hands affected her and when she broke out of her cell during the Cochlea attack, she targeted Furuta to take revenge.