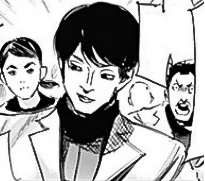 Eric Rolon
Shunichi Shibashi (茨橋 駿一, Shibashi Shun'ichi) was a Rank 1 Ghoul Investigator who participated in the Auction Mopping-up Operation as the squad leader of the Shibashi Squad.

He was killed by Roma Hoito.[3]

Shibashi was a young man with short black hair and black lips, he wore the CCG's formal suit.

He was somewhat cocky and considered Nobu Shimoguchi as someone from the older generation, calling him "subordinate killer" as a way of mocking him, and praised himself as someone of the current generation.

During the Auction Raid, his squad encountered Roma Hoito and he recognized her as one of the Clowns. Considering her a rare opportunity, he ignored orders from Shimoguchi and commanded his squad to attack her. He was killed when an injured Roma feigned helplessness before piercing him with her kagune.

He was apparently quite talented as he became a Rank 1 investigator at the age of 24, according to Shimoguchi.[2]