Dave Woodard
Shousei Idera (井寺 承正, Idera Shōsei) is a member of the White Suits, and a subordinate of Naki.

After Aogiri Tree is disbanded, Naki joins forces with Ken Kaneki, becoming part of his organization named Goat, bringing the White Suits, including Shousei, along with him.

Shousei is a powerfully-built man, with a beak-like nose and large cleft chin. He wears the standard white three-piece suit worn by all members of the White Suits. Notably, he has a large scar over his left eye. 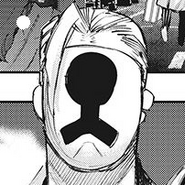 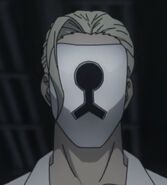 Shousei's mask in the anime

Shousei was one of the hitmen hired by Kanae von Rosewald to take out the Quinx Squad. He and Hooguro distracted Sasaki to separate him from his squad. The two ghouls and their fellow White Suits were easily overpowered by Sasaki though, causing them to flee in fear right after the rest of the Quinx Squad arrived back.

He was later back at the Aogiri base with Hooguro where they are told by Naki about Kanou's plan to "revive" Gagi and Guge.

He took part in the ambush of the CCG vehicles following the Tsukiyama Family Extermination Operation, stealing Ginshi Shirazu's body.

During the Rushima Landing Operation, Shousei along with remaining members of Aogiri Tree and the White Suits engaged Squad 3 in combat. He was together with Aogiri executives who successfully escaped from the CCG.[4]

Shousei was present during Goat's gathering and Naki and Kaneki's conflict.[5][6]

He continued his activities with the united front while looking after Naki's children. Absorbing human knowledge, he thought other ghouls. He devoted his life to serving Naki.

As a subordinate of Naki, Shousei respects him and calls him "Big Bro."

Together with the Hooguro and the other White Suits they brought to fight Sasaki, their combined rating is approximately A+.