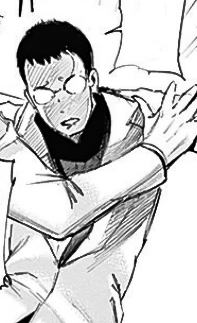 Shougo is a young man with black hair cut into a Caesar hairstyle with slightly wide ears. His most defining characteristic being his wired oval glasses. He wears the standard white coat that reaches toward his knees over a black shirt and pants.

Shougo is presented as a very cowardly and nervous individual. He is also notably clumsy, his speech insecure and unassertive, and when ambushed by Seidou, he sat behind Hina Tougi in fear.

After his squad had begun their entrance into Zeum hall during the Auction Mopping-up Operation, Shougo was running to keep up with his squad far in the back without his quinque ready. He was reprimanded by Tomonori Akai for it and he apologized. He was nearly killed by a ghoul and was saved by Haise Sasaki, he nervously thanked him before Nutcracker's partner arrived.[1]

Afterwards, he witnessed his squad leader get beheaded by Seidou Takizawa.[2] He was told to run by Ryuuta Sawaike, after seeing they had no chance against the ghoul, Ryuuta yells for Hina to run as well.[3]

Later, Seidou caught up with the two, and ate a human in front of them.[4] Shaking from fear, he watched in horror as Hina attempted to make Takizawa remember her, only to be beheaded like their squad-mates.[5]

After the operation, he was found fainted in the ladies' room, indicating he was the last survivor of Atou Squad.[6]

He is not the most skilled of investigators and received the safest position in his squad's set up tactic strategy; far in the back, with the least likely chance of engagement. His reaction time is average, a ghoul able to almost drive him through from his side, indicating his lack of awareness that is demanded of an investigator.