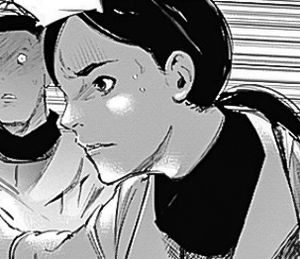 Shion Satomi (里見 紫苑, Satomi Shion) was a Rank 1 Ghoul Investigator who participated in the Auction Mopping-up Operation as the deputy squad leader of the Shibashi Squad and as a member of the Shimoguchi Squad in the Tsukiyama Family Extermination Operation.

Satomi and her squad raided the Luna Eclipse building along with several other investigators. Once inside the building, her squad encountered a lone ghoul, Kanae von Rosewald, with mutilated corpses littered around her. Her squad leader, Nobu Shimoguchi, warned them and decided to exterminate the ghoul. But, before he could approach her, his arm had been severed by the ghoul.

After Shimoguchi had tried to save their lives by lying that he hated them and telling them to "get lost", Satomi and Miho Toga confessed to their squad leader that they had quite liked him.

Shion and Miho were then killed by the ghoul as they tried to stand their ground to protect Shimoguchi.