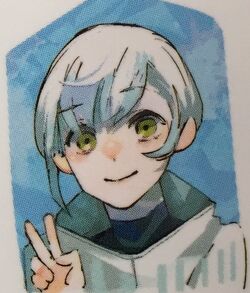 Apphia Yu
Shio Ihei (伊丙 士皇, Ihei Shio) was a former ghoul investigator and alumni of the Sunlit Garden. He served as one of Kishou Arima's personal squad until his defection at Cochlea. He and his squad served as one of Ken Kaneki's bodyguards.

Shio was a young boy with short, white hair. He frequently wore the white trench coat typical of members of his squad.

He had an energetic and playful youth, in spite of his harsh upbringing. Among the three members of his squad, he was by far the most talkative and outgoing.

Not much was known about Shio's past aside from the fact that he was one of the Half-humans who were trained from the Sunlit Garden to be talented investigators.

Tasked to protect Cochlea, Shio and the rest of Squad Zero later encountered Ken Kaneki beside Kishou Arima's corpse. After being granted permission to say their goodbyes to their late mentor, Squad Zero gathered around the dead investigator and mourned his death. [2]

Shio and the rest of Squad 0 followed Kaneki deeper into Cochlea and encountered Eto Yoshimura who was critically injured on the floor. Later, Squad 0 aided Kaneki in intercepting the fight between Kiyoko Aura and Mougan Tanakamaru against Touka Kirishima, Ayato Kirishima, Renji Yomo, Kazuichi Banjou, and the members of Banjou's crew.[3]

After waking up Kaneki, Shio and the rest of Squad 0 proceeded to leave :re for breakfast. Later that day, they attended a meeting wherein Kaneki announces the formation of their new organization, Goat.[4]

During the attack of the CCG at Goats headquaters he was seen along the rest of his squad defending fleeing ghouls from Hajime Hazuki and Koori Ui and several other investigators. After doging one of Hajime's attacks, he was told by Hirako to fight as if his oppenent were a ghoul and stop seeing him as a human. Eventually, he and Rikai were killed by Hajime and their heads were brought by the latter to Kaneki

Shio and the rest of the Zero Squad fought against V and the Taxidermied Owl alongside the remnants of Goat.

6 Years after the Dragon War, Shio can be seen alongside Rikai Souzu and Yusa Arima in a Coffee Shop.

Shio, along with the other former members of Arima's personal squad, protected Kaneki and followed his orders.

Shio seems to respect and admire Arima and was willing to fullfill his last wish to protect Kaneki even if this meant to betray the CCG.

Half-human Physiology: As a half-human hybrid, Shio possessed enhanced physical abilities that allowed him to be a highly-efficient fighter.

Swordsmanship: Though young, he was already an accomplished quinque-user capable of taking on more experienced opponents. He had exterminated many ghouls early into his career, in spite of only being 14 years old.