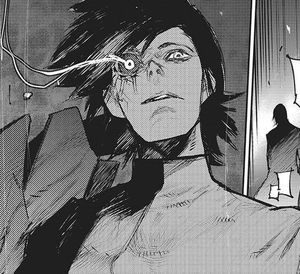 Shinsanpei Aura (安浦 晋三平, Aura Shinsanpei) is a Rank 2 Ghoul Investigator and one of the second batch of recruits to the Quinx Squad. He is the nephew of the Special Class Investigator Kiyoko Aura. He is noted to not have any special achievements in the Academy, but his potential is anticipated.[2]

Aura is a tall young man with dark green hair and bangs that cover his eyes. He wears standard office attire at the office, and the standard Qs cloak during field work. 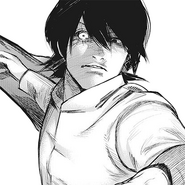 Aura seems rather shy and becomes nervous when spoken to. When interacting with other people, he used respectful forms, such as always addressing his squad leader, Kuki Urie with his title. He is also quite vengeful, seeking to kill Haise Sasaki for what happened to his aunt.[4]

Overtime, Aura started to developed a cruel streak. As shown when killing the Clowns in a merciless manner during the siege, and gave a cruel smile when "Haise Sasaki" was executed.

Aura was first introduced fighting Aogiri Tree members alongside his squad. He encouraged Saiko Yonebayashi and looked out for the team. Later, he accompanied Urie to a meeting with Matsuri Washuu about their progress with Aogiri and was then dismissed to go home. However, he remained outside of the room until Urie emerged since he still had the car keys.[5]

He along with the rest of his squad were assigned to the operation to exterminate the ghouls of Rushima. Their squad was ordered by Matsuri Washuu to eliminate the remaining ghouls on the beach.[6] Five days later, he and his squad were still on the island searching for Tooru Mutsuki.[7]

With Urie in the lead, the Quinx Squad arrived[8] in the middle of the fight between Floppy and Mutsuki. Urie ordered them as they attacked in a set strategy. After Ching-Li Hsiao had distracted the ghoul from the back to the front, Aura stabbed Floppy in the back, yelling to Touma Higemaru so he would make the attack in time from their target's front side. Unfortunately, Higemaru was too close for Saiko to continue and complete the attack and broke the group's fluidity. Higemaru being knocked unconscious to the side, Aura met the ghoul's blow, blocking it. However, Floppy grabbed Aura's kagune, crushing it within his hand's grasp. He then took a hit to face that sent him to the ground where the ghoul sliced through his right leg, leaving him in shock.[9]

Aura recovers from his leg injury inflicted by Amon. His abilities seem to have improved upon.

Aura violently kills a Clown and Mutsuki encourages this behavior, telling him it's okay to be more aggressive when engaging in battle. Later on, Aura stumbles upon a shirtless and panting Mutsuki raping Uta using his kagune to morph his face into that of Haise Sasaki's. He covers Mutsuki up with his coat and tells him he didn't see a thing. Aura says he doesn't care what happens as long as he can kill Haise Sasaki and Mutsuki recommends they kill him together.

Aura attended a large announcement given by Kichimura Washuu along with the other investigators. When he saw the "execution" of Haise Sasaki he broke into a sadistic smile at his beheading.

When Mutsuki struck :re with the company of Oggai, Aura engaged Kaneki in battle when Mutsuki knocked him out of the building, slamming him into the ground. Releasing his kagune, Aura gazed Kaneki with vengeful eyes. The two ensued in a battle, with Aura rapidly striking Kaneki, and Kaneki rapidly dodging the blows that came his way. Aura began to dual-wield his kagune and quinque while Kaneki continued to leap out of the way, until Aura finally landed a severe blow on Kaneki. Kaneki took the blow and released his kagune, telling Aura not to underestimate him whilst he brought his tentacles out of the floor and stabbed Aura through multiple parts of his body, leaving him unable to fight. Aura laid on the floor and watched as Mutsuki set :re aflame in a fit of rage.

During Takeomi's wedding, Aura was not present. Instead, he visited his aunt Kiyoko at the hospital. When Kiyoko questioned why he didn't attend a joyous occasion, Aura grew angered and pulled the sheets off of her to reveal her crippled legs, stating that there will never be a joyous day in his life until he kills Kaneki. Aura then proceeded to leave, not without telling Kiyoko that he'll bring Kaneki to her as a present the day she's healed.

Together with Mutsuki, he headed towards activities in the local district. He idolized his Aunt Kiyoko for the rest of his life.

Aura's aunt. They seem to share a positive relationship, sharing meals and Kiyoko taking an interest in Aura's personal life. Aura appears to have an unhealthy obsession with his aunt, daring to go to immoral lengths and betray the CCG in order to take her revenge. She affectionately calls him "San-chan".[2]

As Urie's subordinate, in comparison to the rest of the Quinx Squad, Aura is very formal when interacting with him, for instance, always using formal and respectful pronouns when speaking to Urie despite both living in the Chateau and knowing him for a lengthy time.

Initially he was respectful to the older man but after being informed of Sasaki's defection that led to his aunt's injuries, Aura holds hostility towards the former investigator. When the execution of "Haise Sasaki" took place, Aura was the only one seen to smile while the others were shown looking away or seem indifferent.

He held admiration towards Mutsuki having been ecstatic when his senior colleague praised him on the Clown ghouls he eliminated. However, this has become questionable due to finding Mutsuki atop a mutilated ghoul naked and out of breath. He still evidently holds him in high regard, however, as he was thrown into a blind rage upon seeing him electrocuted by Renji Yomo, and several chapters later he hurried to Tooru's aid during his battle against Touka Kirishima.

Tsunagi <hard>: A bikaku type mass-produced quinque, shaped like a long sword without a guard, ending with a unadorned handle.