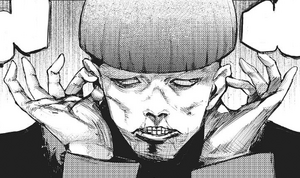 Ben Bryant
Shinme Haisaki (灰崎 深目, Haisaki Shinme) was the Warden of Cochlea. After his predecessor, Kyouji Misaka, died during Aogiri Tree's attack on Cochlea, he was promoted from Deputy Warden to Warden. Formerly, he was an interrogator. He was killed during the Third Cochlea Raid.

Haisaki had a pale and skinny face, and has one vertical scar on each sides of his lips. He had a mushroom haircut and possibly had strabismus.

Shinme valued security and proficiency since Cochlea was considered to be impossible to breach, as noted by Tatara. He also despised the ghoul prisoners he oversaw, considering them worthless. Ironically he approved of the Quinx project.

After the death of Kyouji Misaka during the Aogiri Tree's attack on Cochlea, Haisaki was appointed as the new Warden.[4]

Haisaki escorted Haise Sasaki and Tooru Mutsuki to the third level of Cochlea. During this, he made mention of the Quinx project, expressing his optimism for their potential. He then claimed producing investigators with a "built-in quinque" as a bold decision from the higher-ups, something he openly approved of.[6]

He improved and strengthened Cochlea's security, as Tatara claimed it near impossible for Cochlea to be breached a second time due to Haisaki's work.[7]

Haisaki immediately alerted the prison squadrons to engage Kazuichi Banjou's followers in combat and also identified Sasaki as the culprit who opened the cells.[8] He commanded CRc gas to be released to subdue the ghouls roaming inside Cochlea.[9] As he observed in terror at Cochlea being annihilated, Haisaki recalled what happened to the previous prison warden, Kyouji Misaka when he had failed. Without Haisaki realizing, Donato Porpora approached him from behind, swiftly ripped the warden’s head off and tossed it aside.[2]