Michibata was a sturdy looking man with droopy eyes and a defined face. His short dark hair had a receding hairline and prominent sideburns. He always dressed formally in a suit. 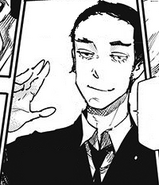 Not much is known about his personality, but he was displayed as being worried about his comrades and quickly took up the leadership position when there was no one else.

Michibata appeared alongside his squad to suppress the SS-rated ghoul Haise Sasaki, who went out of control after using his kagune.[6]

Michibata joined the Quinx Squad while in the Luna Eclipse with the Itou Squad while Sasaki went on ahead. After being confronted by Noro, the combined squads were overpowered immediately with Yasuhito Nezu and Masami Umeno dying instantaneously and their leader injured.[7] After patching up Itou, Michibata notified the CCG to dispatch the medical squad and recognized Noro as one of the most dangerous ghouls known. After pinning down the ghoul's head with the help of the Quinx, he hoped the ghoul would not come back up again. However, Noro's lower half sprung four kagune tentacles, then injured the squad and ripped Michibata in half.[4]

Initially, Michibata thought of Itou as an "airhead" but later came to like Itou's lighthearted attitude and they got along well enough to go out and have drinks occasionally. Later they seemed to be quite close as seen from more of their friendly interactions. Michibata was unable to leave behind Itou for his own safety.

Dying early, Michibata had little time to showcase any skills.