For the game version of this character, see Rio (game). 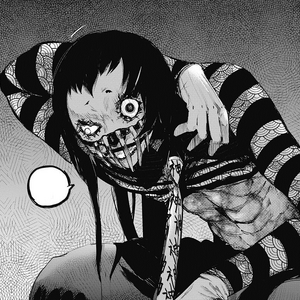 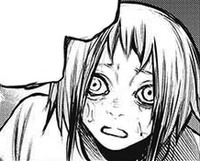 Shikorae (死堪, Shikorae) is a ghoul and an associate of the Clowns, formerly belonging to Aogiri Tree.

Originally named Rio (凛央, Rio), he was an orphan raised by his older brother and kept isolated from others because of his unique abilities. After Shiki Kijima killed his brother, he slaughtered several investigators in what became known as the Jail incident. He was eventually captured by Kijima, and subjected to extensive torture while imprisoned in Cochlea.

He was among the prisoners freed from Cochlea during the Second Cochlea Raid.[1] After the destruction of Aogiri, he joined fellow Cochlea escapee Roma Hoito.

After the Dragon War, Shikorae continued to pose as a threat to Tokyo after developing a monstrous Kakuja as a result of devouring the remains of Dragon, and as of current, is considered the biggest ghoul threat.

As a teenager, Rio appeared with light green hair and pale red eyes. When activated, his kakugan caused a vertical pattern to appear across his face—a feature he retained over the years.

Later as Shikorae, he is a young man with long, brown hair and a slender body with a muscular profile. He sports a striped long-sleeve crop top with a fish scale design along with a pair of dark-colored pants. His tie has multiple markings of the kanji for "God," and his mask is composed of sharp bones that cover the lower half of his face. 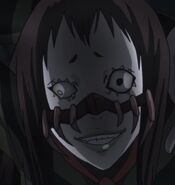 His personality as Rio before the Jail incident is unknown, though he felt a strong familial attachment to his brother and called out to him when he was captured. As Shikorae, he is fairly scatterbrained and shows little sympathy to his victims. He is mentioned by Shousei as having a crazy pace, and his speech patterns are simple and sometimes end with alt codes. Shikorae possesses a streak of cowardice, shown during his fight with Nishiki Nishio in which he wanted to leave after receiving a single injury, as well as displaying selfishness when not ensuring the safety of those he fought beside as he did so.

Orphaned at an early age, he was raised by his older brother and warned to avoid other ghouls because of his unusual abilities. Rio remained in hiding until his teenage years, when his brother was killed by investigators. Devastated by the loss of only family, Rio suffered a psychotic break and slaughtered his brother's killers in what became known as the Jail incident. Afterwards, he repressed the memories of his violent rampage.

He would eventually be captured by Kijima, the lone survivor of the incident and owner of the quinque made from his brother. While imprisoned in Cochlea's SS level, Rio was tormented and brutalized by Kijima on a nightly basis. By the time the Second Cochlea Raid occurred, he had been driven into a catatonic state by the constant abuse. It was in this state that Eto Yoshimura found him, and took an interest in his special abilities. On her orders, he was taken in by Aogiri and became the ghoul known as Shikorae.

When the Quinx Squad was ambushed by Kanae von Rosewald and his hired Aogiri hitmen, Shikorae found Saiko Yonebayashi hiding while all other ghouls and Quinx were busy fighting. Shikorae commented on how chubby Saiko was and bit into her arm, shortly before being interrupted and attacked by the Robed Giant with an ukaku kagune and fled to group up with the other Aogiri ghouls.[2]

Later, he was present during the Aogiri Tree ambush on CCG transports led by Naki in the aftermath of the Tsukiyama Family Extermination Operation.[3]

After the Hachikawa Squad was discovered infiltrating Rushima, Shikorae and Seidou Takizawa were among the pursuers. Successfully latched onto Chuu Hachikawa, Shikorae bit off his nose before spitting it out, remarking that it tasted bad. With help from Takizawa, they made short work of the investigator. When Tooru Mutsuki and Ayumu Hogi tried to escape, he shot at them with his ukaku and managed to injure Hogi. He and Takizawa then ate Hachikawa's remains.[4]

Shikorae cut Nishiki's kagune that held Akihiro Kanou, unexpectedly appearing alongside Roma Hoito.[5] When Roma was skewered by Kurona Yasuhisa, he yelled out to her[6] and checked if she was okay before she charged at Nishiki and Kurona to continue their fight only to be nearly killed. At that moment she yelled out, and he unleashed his ukaku kagune and attacked Kurona. As she thought of his dual kagune types after he switched to his koukaku, he was hit from the side by Nishiki causing him to keel over in pain. After Roma had faith that she had an advantage with Shikorae, he hated the fighting and wanted to go home, so he quickly fled.[7]

When Kuki Urie and Iwao Kuroiwa confront Kichimura Washuu, Shikorae and Roma appear and he attacks both of them with his kagune as Kichimura asks the investigators to die.[8] Shikorae severs Kuroiwa's arm but is outmaneuvered and put in a headlock by Kuroiwa, who snaps his neck. However, Shikorae recovers and switches to attacking Urie but is overpowered and loses his left arm when Urie charges Roma. When Roma tries to eat Urie only for the latter to cut his way free of her Kakuja and tear her out of it, Shikorae attempts to help Roma overwhelm Urie, but Urie fends them both off and decapitates Roma. Shikorae is then blown out the window of the CCG chief's office by Urie, falling several stories to the ground while screaming for his brother.

He survived his fight against Urie, and after the end of the Dragon War, he was part of the number of ghouls that continued to rail against humankind. He possessed the unique ability of forming new kagune by taking in the RC cells of others, but by taking in the cells of dragon orphans, it developed into a kakuja. Many civilians and TSC personnel were sacrificed to him. Due to the recorded number of casualties suffered in battle against him, he became the TSC's greatest ghoul enemy.

Shikorae and Takizawa fought against and killed Hachikawa on Rushima together and seemed to cooperate smoothly. It is presumed that they ate the investigator's body together afterwards.

They arrived together to defend Kanou, despite her being a Clown. Shikorae listened to her during her fight to unleash his kagune; however he fled from her side, showing no need to care for her well-being. In the months following the fall of Aogiri, he is again in her company and doted on by her.

His older brother raised him as a surrogate parent, and was his most important relationship. After losing his brother to investigators, he went mad from grief and killed those responsible. He continued to plead to see his brother during his imprisonment and still clings to those memories even in his deranged state.

Ghoul Physiology: Shikorae is initially considered to be a ghoul of moderate strength though demonstrates high regenerative abilities and speed. He quickly recovers from having several holes blown in him and is agile enough to repeatedly ambush opponents. However, he turns out to be more powerful than expected and possesses multiple Rc types. 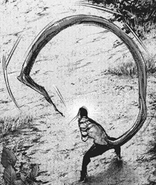 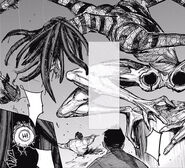 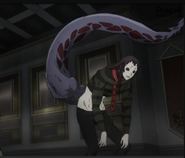