Start a Wiki
watch 01:22
'Tokyo Ghoul' Profile: Shiki Kijima
Do you like this video?

Kijima was an exceptionally strange looking individual with a rotund figure. His face and body were heavily scarred, with discolored skin grafts and facial features that appeared to have been badly mangled or burned in the past. He wore a distinctive black hat and suit, with a red bow tie, and had a peg leg.

Kijima was obsessed with chasing the ghoul Jail in order to dispel his regret that his subordinates were killed and his resentment that he himself was injured.

While he did not forget to show his courtesy to anyone, his character was cruel and vicious. For example, he tortured a member of the Rose family and ripped out his tongue in the process before posting it as a video. He showed intense pleasure while killing and mutilating ghouls.

He also seemed to hold more than a little bit of self-loathing as he did not care about the danger involved with provoking the Rose, saying he did not care how his own ugly body was used. He was ultimately giggling and laughing before his death, signifying how little he thought of his own life and his joy of dying.

Despite his seemingly respectful side, Kijima had an eerily playful side as well. He was portrayed as carrying a mocking attitude towards the ghouls he "interrogated."

In the past, Kijima worked as a Cochlea interrogator.

At the scene of the Jail incident, he was seriously injured and ended up with a patched up body.

Kijima met Haise Sasaki at Cochlea, introduced himself and informed Sasaki that they are working together on the Rose investigation.[6]

He later took part in the ambush of Matsumae and her followers along with Taishi Fura and Hairu Ihei, using Nimura Furuta as bait. While Ihei held off Matsumae, Kijima took the chance to capture her accomplice, Yuuma, with his capture-use quinque. Later on, Kijima admired his prize and took to personally torturing the ghoul, culminating in killing him. He went even further by filming the entire session and posting it on the CCG's website. In the video, Kijima attempted to provoke Rose into coming after him as vengeance.

After the video gained millions of views, both by citizens and investigators, Kijima was called in by Koori Ui and reprimanded for his actions, stating that it was not the way to go about work and that it sparks distrust from citizens. Kijima acknowledged this but did not display any remorse. Instead, he simply left and said that if he was to be fired, he'd accept it.

He was later seen at the meeting for the Rose investigation.

After the Tsukiyama Family Extermination Operation commenced, he was at the Luna Eclipse, while the CCG fought against the resisting ghouls who worked for the Tsukiyama family. The Associate Special-Class warned Nimura Furuta, his subordinate, to not to slip on the blood, as he killed Kurei using his quinque, Rotten Follow.

Later on, he was part of the group that confronted Matsumae and Mairo on one of the upper levels of the building. He passively observed the battle between Ihei and Matsumae, complimenting the ghoul on her strength. After Ihei was killed in battle, he advanced on Matsumae with Rotten Follow while explaining how he killed Yuuma and Aliza with it.

Mairo, thought dead of his injuries, managed to spear him through the shoulder and draw his attention away from Matsumae. In that moment, she slashed off his arm and sent Rotten Follow into the air over them both. It fell blade-first and sliced into his skull with the engine still going as he giggled wildly in his final moments. His partner, Nimura Furuta, looked on with horror and shock. Kijima did not die immediately though, vibrating from the shock of the injury and swinging his quinque around unsteadily, while speaking gibberish, he attempted to run at Matsumae, removing his quinque from his head before finally falling face down.

Kijima and Sasaki worked together along with Itou Squad for the Rose assignment. Kijima has expressed concern for Sasaki's soft side toward ghouls, and Sasaki seems to notice a dark aura surrounding Kijima.

Furuta was assigned as Kijima's partner. There was a mutual share of respect between two investigators, though with Kijima's demise it was shown that Furuta did not care for his boss, going as far as to walk on his corpse and steal his quinque.

Suprisingly, Hirako felt at ease around Kijima, compared to the others, as exhibited in a omake.

Kijima is shown to use two different quinque: 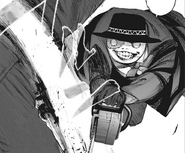 Kijima wields Rotten Follow.
Add a photo to this gallery

Retrieved from "https://tokyoghoul.fandom.com/wiki/Shiki_Kijima?oldid=478230"
Community content is available under CC-BY-SA unless otherwise noted.