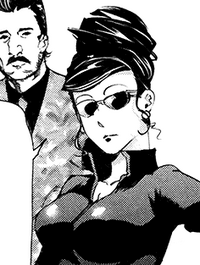 Chapter 84
Shachi's subordinate is a woman that once worked for Matasaka Kamishiro, when he was the leader of the 6th Ward. She cooperates with Gil in managing the ward in their leader's absence.

She is a tall, stylish woman that seems to prefer tight-fitting leather clothing in dark colors, along with a belt that partially exposes her midriff. Her long, dark hair is piled on top of her head in a bouffant hairstyle, and she wears dark sunglasses even indoors.

While primarily deferring to Gil, she is shown to be a highly intelligent and effective woman.

She takes part in the 6th Ward meeting between Kaneki's group and the stand-in leaders, countering Gil's impatience and hostile attitude with a clinical demeanor.[1] She expresses misgivings about the newcomers, inquiring whether they had anything to do with the attack on the Ghoul Restaurant in the 7th Ward.[2]

As a subordinate of his, she is loyal to him and was surprised when she learned that he joined Aogiri Tree.